Will of the Emperor 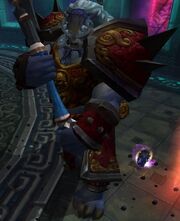 Will of the Emperor is the last boss in Mogu'shan Vaults. It is a dual-target add fight consisting of Qin-xi and Jan-xi.

To start the fight on heroic mode, interact with the Ancient Mogu Pipes on the lower level.

The core chamber of the vaults is protected by stone soldiers who have been motionless for centuries. They are row upon row of warriors, statues armed for a battle that never began. What treasures do they guard? And what is their tie to the titanic power buried with them here in the shadows?

Jan-Xi and Qin-Xi activate after 90 seconds and share a health pool.

On Heroic difficulty, when any construct dies, a Titan Sparks are released.

The fight alternates between an add phase and a brief reprieve, indicated on normal mode with Titan Gas.

While Jan-xi and Qin-xi are active, each tank will have his/her own area by the left stairs and the right stairs, leaving the majority of the fight area free for the rest of the raid to deal with adds. Healers and ranged DPS should cluster together towards the center most of the time.

The DPS priority for killing adds is Courage > Rages > Strength > Jan-xi and Qin-xi. The adds come out on a timer and in a set order. Courages are top priority and must be killed before they reach their target. Rages fixate and melee hard, so they should be killed quickly while being stunned and knocked back. Strengths have a normal aggro table but no melee attack, so they can be tanked by any DPS though it is preferable for a melee DPS to do it. Tank them to the side of the room to avoid AOE stunning the ranged group and keep it occupied until there are no Rages.

For Titan Gas, healers and ranged should group up for heals and melee can finally move to Jan-xi and Qin-xi. This is the brief reprieve from adds that allows the raid to whittle down the bosses. However, an important part of this encounter for the tanks and melee is the Devastating Combo. Not only is it a DPS gain for people who do it right, multiple people failing and getting hit during Titan Gas will put great strain on the healers.

The attacks performed by the bosses can be 180° Devastating Arc front, left, or right, or a smaller 360° Stomp. Each attack has its own wind-up pose. The leg raised precedes the 360° stomp. A pre-thrust pose precedes the front blast. If he points his sword to the left or the right, then the side the sword starts on is safe and the other side is about to get blasted. To help people know where the front, left and right are, mark the tank. There is also a visual indicator that looks like a thin blue arc showing where the strike will hit. Dodging all five strikes will give a player an extra action button called Opportunistic Strike that s/he can use on Jan-xi or Qin-xi to deal a large amount of damage.

Unused quote
Ancient Mogu Machine: The Emperor's Will dominates all it beholds.

Icy Veins Comprehensive Will of the Emperor guide
Retrieved from "https://wow.gamepedia.com/Will_of_the_Emperor?oldid=5980071"
Categories: