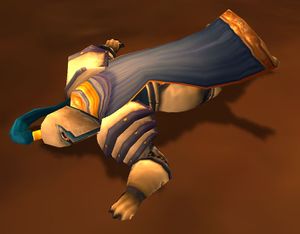 William Allerton was a friend of Thassarian, his body is found at the Farshire Mine in Borean Tundra.

William had a crush on Leryssa, Thassarian's sister. Both were trained under Sergeant Yuval and a part of Lordaeron army. He and Thassarian were assigned to the expedition with Prince Arthas Menethil to hunt down Mal'Ganis. The expedition was a success, but Arthas and Falric went in the wastes and Thassarian went after them.[1]

After surviving Arthas's betrayal, William returned to Lordaeron. He saw a death knight killing Vivian; this death knight threw away an amulet which Vivian had given to Thassarian when he left for Northrend and William presumed that the same death knight killed Thassarian. Little did he know that the death knight was Thassarian himself. Years later he joined the Valiance Expedition and learned that his friend had indeed 'survived'. He sent a letter to his sister Leryssa, claiming that her brother was in Northrend.