They're found in The Barrens, the Wailing Caverns, Thousand Needles, Dustwallow Marsh, Feralas, Zul'Gurub, the Temple of Atal'Hakkar, the Sethekk Halls, Netherstorm, and Blade's Edge Mountains. Wind serpents seem to have a connection with Hakkar the Soulflayer. The Vale Screechers are said by Yeh'kinya to be "the cousins of an old, old god, and their spirits are linked to him" in the quest

[44] Screecher Spirits. He then says that this "old, old god" is the "dead god Hakkar, the Soulflayer".

Another type of the wind serpent can be found in Outland. They have smooth, vibrant skin and alien, bony features with spikes. This is a mutation, as before Draenor's destruction they were identical to the Azerothian breed. The wind serpents of Draenor were the children of Sethe. As Sethe's bones vanished when the Spires of Arak were destroyed during the formation of Outland, the wind serpents in Outland are seemingly leaderless.

Most wind serpents subsist on a diet of fish, but a good hunter can offer much more interesting prey.[1] 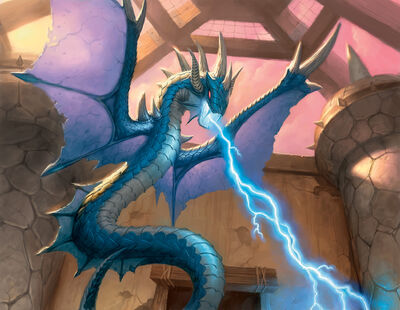 Bolton in an arena.

Wind Serpents are a family of Cunning pets and are tamable by hunters starting at level 11. Wind Serpents, through the use of their

[Lightning Breath], breathe lightning, increasing magic damage taken by 8% for 45 sec. There are a twelve different skins available for wind serpent pets- both with normal and spiked wings. The

Scion of Quetz'lun found in Zul'Drak has an unique white and black skin. Wind serpents were once a popular pet, due to its easy diet, accessibility, and good skills. Wind serpents have become more uncommon as other pet families have gained useful skills as well.

These serpents are sometimes found in the Barrens, and they are often revered by local tribes of savage races such as quilboar, who see wind serpents as spirits of the sky. Wind serpents are simple beasts that reach sizes of 4 to 6 feet in length and can weigh up to 50 pounds. While green is the most common color, their scales can range in any hue from dark brown to a faint orange color. Their plumage often matches their scales, but with red or yellow tips. Most wind serpents subsist on a diet of rabbits and rodents, but they will eat things as large as small wild pigs or young sheep. While not aggressive, wind serpents are territorial, tending to attack anything that comes near their nests, built high in trees. Wind serpents are predators that ambush their prey, crawling among tree branches or flying silently out from a dark nook. They attack with lightning speed, swiftly poisoning their prey to death.

Wind serpents vary drastically across species. Some are constrictors rather than vipers. Other wind serpents are in truth magical beasts instead of animals, and have an astonishing variety of magical abilities. Magical wind serpents tend to be slightly larger and tougher, than normal wind serpents. The cloud serpent represents one such magical variety of wind serpent, in this case one having the ability to breathe lightning.[2] They are distantly related to couatl.[3]