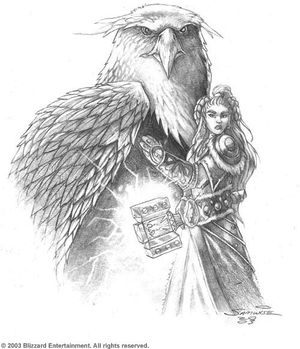 There are many wind riders on Azeroth and Outland mostly found in the ranks of the Horde. They acts as keepers / masters, vendors and trainers. They provide flights for other places.

The Wildhammer dwarves of Aerie Peak long ago befriended the mighty gryphons and these Windriders have helped the Alliance in various wars and conflicts, lending their aid to its cause in order to keep the skies free. They are renowned for defeating many mighty dragons during the capture of Alexstrasza, darting around the crimson giants with astounding agility, confusing it and its handler, and finally one dwarf would swoop in and strike a killing blow to the head or skull.

In close combat, Gryphon riders wield the legendary Stormhammers, but when taking down a dragon, creatures of thick scale where a hammer would be little use, they have been known to strike with long-handled battle axes with adamantium blades, biting through the scale.

The sapient wyverns of Kalimdor were eager to ally themselves with the shamanistic Horde. Impressed by the orcs' commitment to honor and victory, the wyverns allowed the orcs to ride them into combat against those who would disturb the tranquility of Kalimdor and its denizens. The wyverns, who share a common ancestry with both dragons and gryphons, use their powerful claws and razor-like fangs against both airborne attackers and ground troops, while their riders may hurl envenomed spears at the enemy.

Wyvern riders carry envenomed spears that have been coated with the lethal venom from Stranglethorn's giant jungle snakes. When pierced by these spears, the riders' enemies are weakened and slowly eaten alive as the vile poison courses through their bodies.[1]

Swift flying unit mounted by an Elven warrior. The fierce warriors of the Dragonhawk battalions are often the first into combat, picking apart the enemy ranks and surrounding enemy towers with dense fog so that reinforcements can strike unhindered by enemy defenses. Attacks land and air units.

Hippogryph riders are night elf female archers and scouts mounted on hippogryphs as a part of the Sentinel Army. The brave creatures respond to the female riders as if they shared an empathic bond.[3]

Hippogryphs have a keen awareness of aerial tactics. Without riders, they attack in quick dives, striking with their beaks followed by swipes with their talons. Female hippogryphs avoid direct combat. If trapped on the ground, hippogryphs charge, trying to get space to regain the air. Carrying night elf archers, hippogryphs make careful circling attacks, darting within range long enough for a shot before wheeling away.[4]

During the Second War, orcs captured Alexstrasza. With her dragons they became dragon riders, and rose them into battle against the Alliance of Lordaeron. It was these dragon riders who revealed Gul'dan's betrayal and who destroyed the Third Fleet.[5]

Windriders are the knights of the sky, riding their flying mounts into combat. With time and experience, rider and mount move in graceful unison that makes them increasingly formidable opponents. The mount of a windrider is well disciplined and trained for combat. A windrider has a close relationship with her mount similar to the relationship between a spellcaster and his familiar. A windrider can intuitively sense the emotional mood of her mount from a distance. As the bond grows, the windrider and her mount can communicate as effectively as though they shared a common language, though other creatures cannot understand the communication without magical help. In time this bond between the windrider and the mount becomes telepathic - each can see through the other's eyes. As they ride in combat, windriders and their mounts learn to watch for one another's safety in combat.[6]