Windrunner Spire is the former home of the Windrunner family near a village named after them on the west coast of the Ghostlands.

The Cult of the Damned transformed many of the elven rangers into banshees. It is now overrun by banshees and cultists of the Scourge, operating from Deatholme in the south. Remnants of artifacts are scattered throughout Windrunner Spire from the Windrunners for adventurers, such as

Adventurers of the Horde found Sylvanas' necklace here on one of the Scourge.

During the trial of Garrosh Hellscream on Pandaria, Vereesa Windrunner summoned Sylvanas to Windrunner Spire in secrecy to discuss her plans to assassinate the former Warchief. Vereesa, motivated by the death of her husband Rhonin, sought the help of her undead sister to poison Hellscream and Sylvanas, ultimately, agreed to aid her. The spire is still inhabited by hostile banshees and the remnants of the Deatholme cultists as of the novel, which takes place four years after the blood elves join the Horde.[1]

A month after the end of the Argus Campaign, the Windrunner sisters reunited and attacked Windrunner Spire's undead interlopers. Sylvanas also prepared to have its entrance serve as an ambush spot, but she never gave the signal for her dark rangers to attack Alleria and Vereesa.[2] 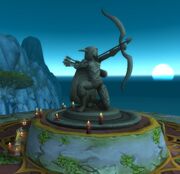 After the events at Orgrimmar leading to the conclusion of the Fourth War, loyalists to Sylvanas rendezvous with her and Nathanos at the Spire. She muses on death and her bargain with Queen Azshara, while the fallen banshees bowed to her, before departing the grounds.[4]