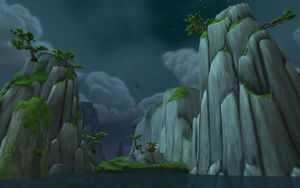 Windward Isle, also known as Wind Cloud Serpent Island[1] or Windless Isle; can be found off Jade Forest's northeastern coast in the Mistveil Sea. This island is one of the few locations where wild cloud serpents have nests and lay eggs. The Order of the Cloud Serpent watches over this island protecting their kind, however, the Slitherscale saurok have begun invading the island stealing the eggs and even killing the serpents young and old.

The cloud serpents mostly keep the southern part of the island, while nature sprites and tigers live in the northern section. The Slitherscale saurok have claimed the eastern side of the island where the turtles inhabit.

A portion or version of this article was copied from