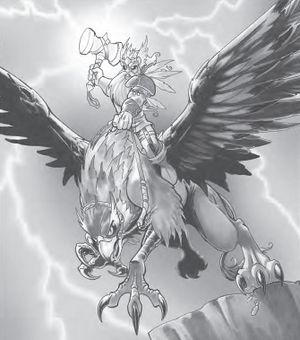 Windwarriors are elite windriders. Once, long ago, warriors fought on foot, with nothing but their own bodies and weapons to determine the outcome. Then people domesticated animals, and discovered they could ride the larger beasts, giving them both height and speed unmatched by any landbound foe. Thus mounted combat began. Now warriors on horse, panther, wolf and other beasts are a common sight, and many learned to ride almost as early as they learn to walk, reveling in the speed and ease of such travel. But riding on a beast, watching the ground flash past just below, pales against the thrill of riding an aerial mount, soaring through the air, feeling the wind tugging at your cheeks and lashing at your hair. And, in combat, warriors mounted on such airborne steeds have a clear advantage, swooping in to attack and then sailing safely beyond reach again. Few can master such creatures however, and fewer still have the discipline, the grace and the calm to forge a bond with their mounts, becoming less warrior and rider than a single creature united in purpose under the sky. These are the windwarriors.

A windwarrior is more than a mounted warrior. He is a child of the air, a brother to the gryphon, an enigma to the landbound. He has become one with his steed and together they soar ever higher, exulting in the freedom of flight. Windwarriors fight because it is required, but they fly because they must, because without such speed and altitude they would surely perish. Which is not to say that windwarriors are not formidable foes. Anyone who has ever faced one can attest to their martial prowess. Yet fighting is only one aspect of being a windwarrior. Speed, agility, freedom, and the bond with their mounts are the core of the class, the heart of their brotherhood. Anyone who lives to fly is a brother, and anyone who does not appreciate flight will never understand.

Most windwarriors are Wildhammer dwarves, as they are the most comfortable both in the sky and riding winged mounts. Many others also become windwarriors, however, since the most important requirement is not race but inclination and ability. Windwarriors often form their own organizations within their societies, though it is a loose fraternity rather than a rigid military unit or formal hierarchy. Many windwarriors remain with their tribe (or city, or village, or whatever) and perform various tasks and services for them, functioning as a combination scout, messenger, hunter, and guardian. Others take contracts with various groups, individuals, or even governments. In several cases windwarriors banded together to form mercenary units, hiring out for military missions to anyone who can pay them. These units rarely last, however, as most windwarriors prefer their freedom and eventually get tired of obeying others.

Wildhammer dwarves respect windwarriors and consider that occupation one of the highest possible. Wildhammer children learn to ride gryphons shortly after walking, climbing and swimming, and many train with windwarriors as youths. For them, the windwarriors are part of the community and far and away the most exciting and adventurous members of the tribe. The Alliance leaders also value windwarriors, and have relied upon them for reconnaissance, communications, retrieval, rescue and attack. Though few in number, the windwarrior's speed and maneuverability makes them immensely valuable in any combat, particularly when facing landbound forces.

Despite all this, most windwarriors are humble. They know well enough that they are only aloft thanks to their mounts, and in many ways it is the mount who is truly important. This attitude keeps windwarriors from growing too arrogant, especially since they each care for their own mounts personally. Windwarriors rarely desire riches or fame, anyway. They are far more interested in their own freedom to fly as they choose, where they wish and when they want. Windwarriors need to be flexible and quick to handle sudden shifts in flight. They empathize with their mounts to win the beasts' trust, loyalty, and eventually love. Every windwarrior learns to appreciate his surroundings, his mount and his own abilities, and learns to use these gifts wisely. Windwarriors must endure punishing winds, harsh temperatures, and the general fatigue caused by travel. They use their strength for tugging on reins and lugging supplies. Most windwarriors are Wildhammer dwarves, and Wildhammer dwarves are staunch allies of the Alliance, thus most windwarriors are as well.

Every windwarrior loves flying, loves the sky, loves freedom, and loves his or her mount. But other details may differ, not the least of which is personal style. Some windwarriors consider themselves knights of the air. They wear heavier armor than most windwarriors, and carry an axe, sword or mace plus a lance or glaive. Many carry shields slung across their backs or hanging from their mounts. These windwarriors favor strength and speed over subtlety.

Others are the opposite. These windwarriors favor stealth, working from above where no one would expect them. They wear little or no armor and carry only melee weapons and smaller ranged weapons. Their great gear is dark and they carry little ornamentation - everything is about speed, stealth and surprise.

A third faction favors the lighter weight but not the stealth. These windwarriors wear brightly colored clothing and light armor, and wield lighter, faster weapons. They scoff at the so-called "knights of the air" but do admire their sense of drama. These windwarriors have their own drama, dashing across the sky and leaping down to confront foes and creating an image of enthusiasm, playfulness and careless skill.

Windwarriors have other styles as well. Some belong to organizations or groups with shared ideals, while some are loners, just a man and his mounts. One major element of windwarriors is the choice of mount. Gryphons are the most common, particularly for Wildhammer windwarriors, but they are by no means the only mount available. high elves and blood elves favor dragonhawks, while night elves select hippogryph mounts; orcs choose wyverns, and trolls favor vampire bats. Those who pick different creatures for their steeds may develop a different style and appearance based upon their mount's relative size, speed, agility and aggression.[2]