The Winged Guardian serves both as a flying and a ground mount depending on the terrain. When you take to the skies astride a blazing, eagle-winged lion, your comrades will know you mean business. Serious business. The majestic Winged Guardian is a titan creation from Uldum that was designed to protect Azeroth’s most ancient secrets.[1] This Guardian of the Titans will carry you across Azeroth as fast as your riding skill will take you.

Unlike the mounts from the World of Warcraft Trading Card Game, this mount is directly purchasable from Blizzard. Released on May 31, 2011, it is the second mount to ever be offered in this way, the first being the 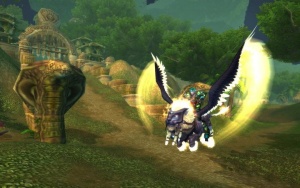 Unearthed recently in an ancient tomb, this mighty winged lion may have once served one of the ancient Tol'vir princes.

Light up the night on this blazing, eagle-winged lion.

Part lion, part eagle, all business - When you take to the skies astride a blazing, eagle-winged lion, your comrades will know you mean business. Serious business. So saddle up, because this flying mount will travel as fast as your riding skill will take you.

Players are mailed this mount by Mei Francis:

I'm told you've been searching for a - truly - exotic mount.

Does an ancient Winged Guardian of the Titans sound exotic enough?

A Winged Guardian appears as one of the bosses that can be encountered in the Tombs of Terror adventure in the Saviors of Uldum expansion for Hearthstone.

Winged Guardian is also a a rare druid card in the Galakrond's Awakening adventure. Its flavor text reads: "Take these broken wings, be reborn, and learn to fly again."