The Wintersaber Trainers is an Alliance-only faction consisting of only two night elven NPCs that can both be found in Winterspring. Quests are available from Rivern Frostwind who is located at the top of Frostsaber Rock in Winterspring.

Two quests can be attained at level 58, a third one is attainable at level 60, and a fourth quest gives access to a daily quest. There is no reduced reputation from turning in these quests when they are grey (as with all reputation gains since patch 3.0.8).

The existence of the Wintersaber Trainers used to be a cause for complaints for many players on the Horde side, seeing as there was no Horde counterpart for the Trainers and their mount. However, as of Patch 3.2, the Ravasaur trainers in Un'Goro provide a horde equivalent via

The old system had players paying 100

to obtain the epic mount

[Reins of the Winterspring Frostsaber] after reaching Exalted, but this is now obtained through the quest

[50] They Grow Up So Fast requiring 20 days worth of quests to complete. Players who already unlocked the mount the old way can still purchase the mount at any time. 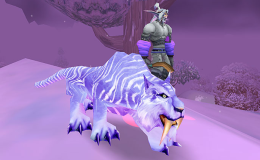 Players start at neutral with Wintersaber Trainers. Pay attention to the bottom quest - it gets you max rep when completed (so pretty much, don't bother with the rest!)

Before The Burning Crusade was released, the first two available quests (

[60] Winterfall Intrusion) only gave 50 reputation each, and

[60G] Rampaging Giants gave 75 reputation. That meant that you were to complete a total of 840 quests (746 if you included the

[60G] Rampaging Giants quest in each round) before you could buy this mount; note that at level 60 the mobs were a lot harder to kill than at level 70 or 80. With the release of the expansion the reputation gain increased from 50 rep per quest to 75, and 100 for

[60G] Rampaging Giants, lowering the number of quest turn-ins to 560 (or 546 with the giants) to reach Exalted. Patch 2.3 increased the reputation gained with many pre-Outland factions, including the Wintersaber Trainers, boosting the first two quests to 250 reputation each and

[60G] Rampaging Giants to 350 reputation. This lowers the number of turn-ins to 168 (153 with the giants), making this mount far more obtainable.

Only one repeatable quest will be available at first, so until neutral 1500/3000 is reached the

[60] Frostsaber Provisions quest should be repeated. Any Shardtooth and Chillwind mob in Winterspring will drop these when you have the quest, but not otherwise. As of patch 4.0.3a, it appears as if there is a 100% drop rate on Shardtooth and Chillwind provisions, although the drop rate used to be quite low. It will take 6 completions (6 also for Humans, putting you at 1650/3000 Neutral) for this part, requiring 30 of each meat. 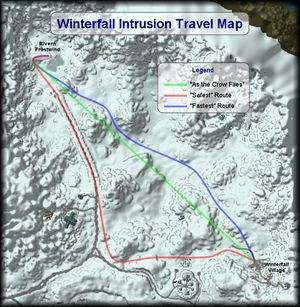 Halfway through neutral the

[60] Winterfall Intrusion quest will be available. This quest requires to kill 10 Winterfall mobs in the Winterfall Village, just east of Everlook. If the quest

[50] Winterfall Activity has been done with the Timbermaw Hold, [Winterfall Spirit Beads] can drop from the Winterfall mobs. If a player wants both reputations, saving the beads until revered with Timbermaw Hold will result in a lot of "free" reputation from killing the mobs.

This quest can be done in groups for increased speed. Players grinding either Wintersaber Trainers or Timbermaw Hold reputation can often be found in the Winterfall Village. Even with an epic mount, the travel to and from Winterfall Village takes up much time. There are tigers among the route who may daze you, which will result in a dismount, this should be avoided (but can be hard as they'll catch up with you on a 60% mount). Usually this quest is repeated all the way to exalted, ignoring the third quest.

There are fewer Shamans than Ursas in Winterfall Village. If you kill the Ursas and Denwatchers in the village, Shamans may spawn to replace them. There are about six Ursas and an occasional Shaman up on the hills behind the village. There is also a Shaman that spawns outside the village entrance and one in the cave with Chief Winterfall.

If you don't want to have to run all the way to the quest giver and back so much, picking up both the Frostsaber Provisions and Winterfall Intrusion quests simultaneously can save some time. Though Frostsaber Provisions takes longer, it saves a ton of traveling time per turn-in since you can go from quest giver to Winterfall Village for one and on the way back just head north to do Provisions, completing 2 quests per travel. It will take 15 turn-ins. (14 for Humans, putting you at 350/12000 Honored)

At honored the third quest

[60G] Rampaging Giants is available. The quest requires the player to kill 4 Frostmaul giants and 4 Frostmaul Preservers. They are a lot harder than the Winterfall mobs and the travel lengths are quite longer. This quest is usually skipped, and instead Winterfall Intrusion is repeated. If you can handle the Frostmaul giants, it can be efficient to do both the Rampaging Giants quest and Winterfall Intrusion quest together. This cuts the number of trips back to Frostsaber Rock by more than half given that the Rampaging Giants quest gives 100 more rep than the Winterfall quest. This will take 40 turn-ins, or 66 turn-ins if you don't take the third quest. (35 and 60 for Humans, respectively)

Due to some players grinding Timbermaw Hold reputation and doing several quests in Winterfall Village, this quest can indeed turn out to be a faster reputation reward than the Winterfall Intrusion one. Often it may be hard to find enough of one of the two types of Frostmaul required. If you kill the abundant kind, more of the other kind will usually spawn.

There are about two dozen Shardtooth bears on the Hyjal side of the bridge, making that part of the Provisions quest easier.

This faction has changed dramatically since Cataclysm, making this grind much more accessible. Players are required to complete an introductory quest, and then complete another quest that awards the mount. The mount quest requires some gold, materials, as well as 20 items that can only be obtained from a Winterspring daily quest. Each daily quest awards a significant amount of reputation as well, so players will reach Exalted by the time they are ready to get their mount. All other quests that used to grant faction rep have been removed.