Witch Doctor Zentimo is a Zandalari troll located in Nazmir. He served the loa Krag'wa until they were attacked by the blood trolls. He was injured and eventually succumbed to his wounds after asking the Horde adventurer. His body was delivered to the loa who asked the adventurer to perform a ritual to honor the witch doctor. By using the

[Scepter of Rebirth], his spirit was sent to join the other deceased followers.[2] 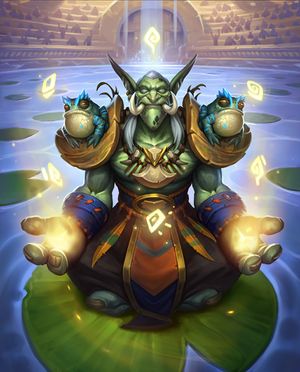 In the Hearthstone expansion Rastakhan's Rumble, Zentimo serves as the champion of Krag'wa's Frogs, a serene and eccentric team of troll shaman, and appears as a legendary shaman card. His flavor text reads: "Serenity. Peace. Many frogs."