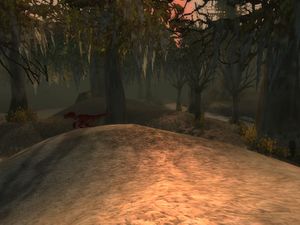 Witch Hill is an area in Dustwallow Marsh, located about a third of the way down the peninsula on the way to Theramore Island (or northwest from there). Near its center is Swamplight Manor, home of "Swamp Eye" Jarl. It also contains a few camps of the Mirefin murloc tribe. Witch Hill is haunted by the demon Zelfrax.

The area is known as Witch's Hill. Tauren tell of a murloc witch who lives in a hut on a high hill and speaks nothing but the truth. Those who have braved the swamp's dangers did find the oracle, but it is not the witch. She takes a supplicant's question and repeats it in a surprisingly strong voice - and the hill gives its reply. In truth, it is not a hill at all but a giant turtle that hears only the witch's voice and replies in an unknown tongue. The witch translates the oracle's words for a fee, and its pronouncements are remarkably accurate.[1]