This article is about the nightborne withered. For the creatures in the RPG, see withered creature.

The withered (or Withered) are nightfallen who could not find sources of arcane to feed their starvation and fell into a mindless, feral withered state. Withered are considered beyond redemption and there is no cure yet to their state. They are not only consumed by a burning thirst for the Nightwell but are tormented by their former memories, truly a fate worse than death.[1] One of the final symptoms just before turning is that the nightfallen will lose their eyesight.[2] It is surprising that the withered don't try to eat their own clothing when it contains innate power.[3]

Some withered in Azsuna capture blue dragonflight's whelplings, knock them unconscious, and drink their mana.[4]

Though they are physically similar to the wretched blood elves, they are fundamentally different. The transformation into wretched is due to over-indulgence and reckless abuse of arcane magic, whereas withered are a result of withdrawal from the energies of the Nightwell.[5]

During the Nightfallen rebellion, withered that joined Thalyssra were trained and made fel-resistant. 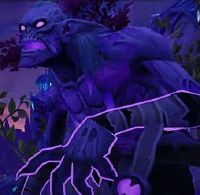