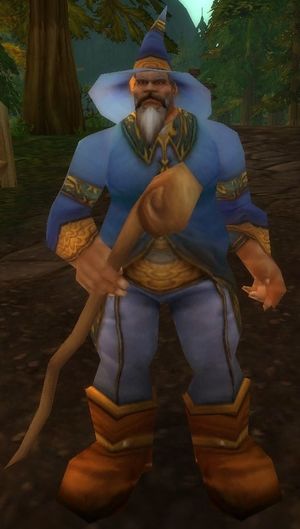 In World of Warcraft, Dalaran, the Scarlet Crusade, Defias Brotherhood and Syndicate all employ wizards.

Historically, wizards have been male, and there was considerable resistance even in Dalaran to women taking up the profession in spite of the city's tradition of training sorceresses and female archmages. No Kirin Tor sanctioned female wizards appeared to have existed prior to 800 years ago, when Aegwynn became Guardian. Even in the recent past, it has been difficult for women to become wizards — Jaina Proudmoore faced considerable obstacles in her ambition to be more than a mere sorceress. Fortunately for her, she was able to convince Antonidas to care more for her magical talent than her gender, and she became a fully qualified wizard in record time.[1] 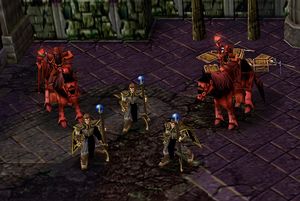 A group of rogue wizards in the ruins of Dalaran.

Though most contemporary human and high elven mages bow to the sovereignty of Dalaran and the Kirin Tor, there are a great many who choose to delve into the secrets of magic by themselves. Considered to be non-sanctioned renegades by the Kirin Tor, these rogue mages strive to expand their knowledge of magic and spellcraft beyond the constraints of what most other wizards believe to be safe or morally acceptable.[2]

Wizards are arcane spellcasters who have undertaken intensive study of magic in places such as the Violet Citadel of Dalaran or the Academies of Silvermoon in Quel'Thalas. They do not channel arcane power, but instead use their vast knowledge of otherworldly forces to harness the energies to their will.

Wizards come from any races. A night elf who takes this class is stripped of her racial heritage and effectively and physically transforms into a high elf over time. When it starts it is a painful and irreversible process that only takes a week. Orcs and tauren are unlikely to take this class, since they lack wizards available to train anyone and have a bias against arcane spellcasting to begin with.[4]