The tower that houses the portal to the Wizard's Sanctum. 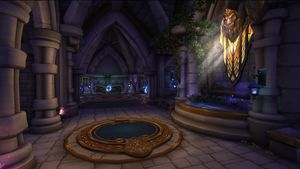 The interior of the sanctum.

The Wizard's Sanctum is a tower and a portal room located in the central-southern part of the Mage Quarter in Stormwind City.

Lisan Pierce, Janey Anship, and Suzanne can frequently be found outside of the Sanctum, discussing in great and confusing detail about topics such as portals and polarity — however, if one listens closely, it is revealed that they are merely trying to develop a love potion for one of the group's crushes ("All this for a love potion? He better be worth it...").

With patch 8.1.5, the tower's interior was completely revamped to house the Stormwind Portal Room[1] for all the portals to a number of different areas on Azeroth, Outland, and Draenor that had previously been scattered throughout Stormwind. Though the personnel working here are generally affiliated with Stormwind, decoration suggests the Kirin Tor helped with the remodeling.

For mages in training, access to the trainers is gained by going up the ramp and climbing to the highest part of the tower and then passing through the portal there.

Note: At the entrance to the tower there is an Honor Hold Mage and Vanguard Battlemage that may take you to the Dark Portal in the Blasted Lands, if eligible.

Additional portals to Cataclysm specific areas are available in the Eastern Earthshrine.[2] Portals for allied race starting areas are still in front of the Stormwind Embassy.

The subject of this section did not make it out of the alpha stages of Shadowlands.

It also contains the Academy of Arcane Arts and Sciences.[3]