From Wowpedia
(Redirected from WoW Chronicle)
Jump to: navigation, search 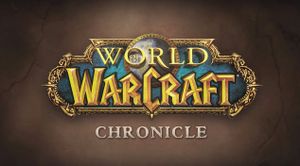 World of Warcraft: Chronicle (or simply the Warcraft Chronicle) is a series that attempts to codify, tighten up and clarify the history of Warcraft.[1] There are three volumes.[2]

Chronicle is the "Warcraft Book of Cain" that was first mentioned by Chris Metzen at the Mists of Pandaria launch party in 2012,[3] which refers to the book released alongside Diablo III that covered the Diablo universe's lore. According to Micky Neilson, the book is like a bible with illustrations.[4] Chronicle is checked by internal readers and Blizzard's historians.[5] Information that is left out from the Chronicle books and originate from other canon sources is still considered canon.[6] At BlizzCon 2019, Steve Danuser stated that Chronicle is written from the point of view of the titans and their servants, and there are elements of the cosmology that the titans didn't know about and which are therefore only hinted at in Chronicle.[7]

Matt Burns hinted on several occasions that there may be more volumes in the future,[8] but for now, the third volume, despite ending with "To be continued..." like the first two, is the final one. In late 2018, it was re-confirmed that despite the series having had a really good reception, there are no plans for an eventual continuation.[9]

These subjects were stated to be possibly covered in future volumes.