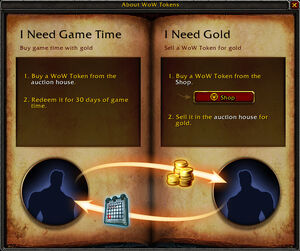 Example of how this new in-game item will work. 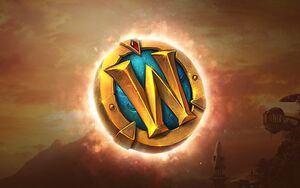 On the Blizzard Shop

Players can use the WoW Token item to redeem it for 30 days of game time, consuming the Token.[1] If the player's account is currently inactive, they can redeem a Token through the character select screen. If the player does not possess any Tokens, they can purchase one directly from the character select screen for the current market price, with the gold deducted evenly from all characters on the selected server.

Tokens were enabled in all regions during Patch 6.1.2 at various dates and starting prices:

It was temporarily disabled on January 24, 2017 in the Americas, Oceanic, and European regions due to technical issues.[7] This only affected token sales and did not disable WoW Tokens that were already in players' inventories.

Tokens were enabled for Blizzard Balance during Patch 7.1.5 at various dates and currency amount.

The WoW Token can be sold on the auction house for gold. The auction buyer can then redeem it for 30 days of game time. This Token may not be traded or redeemed; it may only be listed for sale on the Auction House.

In-game, the WoW Token exists in the form of two items with a special new quality color: WoW Token. The first is purchased from the In-Game Store for real money, is immediately bound to the selling character, and can only be sold on a special new tab of the Auction House.

The second item is purchased by other players using gold, is also immediately bound to the purchasing character, and can only be redeemed for 30 days (or 2700 minutes) of game time or for $15 USD / €13 EUR / £10 GBP Blizzard Balance. The second token cannot be resold.

The following gallery of images demonstrates the process of buying the WoW Token from the In-Game Store and selling it on the Auction House, as seen on the public test realm:

The following gallery of images demonstrates the process of purchasing a WoW Token with gold on the public test realm and redeeming it for game time.

WoW Tokens can also be purchased or redeemed from the character select screen, to reactivate a currently inactive account.

From the Auction House

Thank you for your purchase of a WoW Token!

To redeem your WoW Token for game time, right-click the item from your inventory.

We'd like to thank you for continuing to play World of Warcraft with us. Good luck in all of your adventures to come!

How do I buy a WoW Token for real money?
WoW Tokens will be available for purchase for real money through the World of Warcraft in-game Shop. You can access the Shop through the row of feature buttons next to your character's bags.

I need gold! How do I sell a WoW Token to another player?
You'll be able to sell WoW Tokens through a dedicated Token exchange in the Auction House, located in a new Game Time section. WoW Tokens cannot be traded or sold any other way.

How much gold will I receive when I sell a WoW Token?
The gold value of a Token will be determined dynamically based on supply and demand. When you put a Token up for sale, you'll be quoted the amount of gold you'll receive upon a successful sale. If you then decide to place the Token up for sale, that amount is locked in, and the gold will be sent to your mailbox after another player purchases your Token.

I need game time! How do I buy a WoW Token from the Auction House?
When you visit the Auction House, you'll be presented with the current market price for a WoW Token in your game region—there's no bidding involved, and all Tokens in a game region are priced the same at any given moment. If you decide to purchase one, you'll receive it in your mailbox, and can then immediately redeem it for game time.

How much game time do I get by redeeming a WoW Token?
You'll receive 30 days of game time when you redeem a WoW Token.

Can I resell a WoW Token after I've purchased it for gold?
No, each WoW Token can only be sold once. After you purchase a Token for gold, it becomes Soulbound. At that point, it can only be redeemed for game time.

How much will a WoW Token cost on the Shop?

Why are you introducing the WoW Token feature?
We've heard feedback from players that they'd be interested in a secure, legitimate way to acquire gold that doesn't involve the use of unauthorized third-party gold-selling services—one of the primary sources of account compromises. We also know players who've amassed large amounts of gold through regular play would be interested in the ability to trade some to other players in exchange for game time, helping cover their subscription costs. The WoW Token feature gives players on both sides of the equation a secure and straightforward way to make that exchange. It opens up a new kind of payment option for World of Warcraft players, and we hope that it will also help lead to fewer account compromises and a better game experience overall.

How is acquiring gold by selling a WoW Token different from buying gold from third-party services?
Buying gold from third-party services negatively impacts the game experience for everyone. The overwhelming majority of the gold these services provide comes from stolen player accounts, halting the victims' ability to play the game and contribute to their guilds. On top of this, gold selling companies often farm resources using hack programs, sell fake product codes as a scam, and spam entire realms with ads to buy gold, disrupting the game in very real ways.

The WoW Token allows players to exchange real money for gold in a secure and sanctioned way—together with the ongoing efforts of our developers, support staff, and anti-hack teams to stop the exploits these companies use and help players who have become victims of their operations, we hope the Token can help make World of Warcraft a safer and more enjoyable game for all of our players.

Why can't players set their own prices for the WoW Token?
The WoW Token feature is designed to facilitate the exchange of gold and game time between players in as secure, convenient, and fair a way as possible, and without making players feel like they're playing a game with their hard-earned money. Having a set current market price and a straightforward exchange system is the best way to achieve that—you don't need to worry about whether your Token will sell or not due to being undercut or the market shifting, and everyone receives exactly the amount of gold they were quoted.

What happens if the price quoted to me is different from what the Token actually sells for?
You will always receive the gold amount quoted to you at the time you place a Token up for sale, regardless of what the current price is when the item actually sells.

How long should I expect to receive my gold after putting a Token up for sale? How does the game determine whose Token to sell?
The amount of time it takes to receive your gold after putting a Token up for sale depends on a variety of factors, including the current supply and demand. When you list a Token, you'll be quoted an estimated time based on the current Token supply and the rate of recent transactions, but the actual amount of time it takes to sell is likely to vary (note that Tokens do not expire). In most cases, Tokens are sold in the order in which they were put up for sale; however, there are some exceptions to this, such as when a Token purchase is undergoing verification.

If I buy a WoW Token from the Auction House, how long does it take to receive the Token?
Just like a standard Auction House purchase, it will normally arrive in your mailbox nearly instantaneously.

If I'm buying a WoW Token for real money from the in-game Shop, how long does it take to receive it?
Once you successfully complete a purchase, your Token should arrive in your inventory (or mailbox, if your inventory is full) almost immediately.

Do Tokens expire? What happens if I accidentally delete one?
No, Tokens do not expire. They also can't be deleted, so no need to fear accidentally trashing them.

Can I stop my auction or receive a refund after it was purchased (for gold or real money)?
All transactions are considered final and auctions cannot be cancelled, so make sure you're certain you want to proceed before listing or buying a Token. To help prevent unintentional transactions, you will be prompted to confirm your purchase or sale before it's finalized.

Is there a deposit? Does the Auction House take a cut of the Token seller's gold?
There's no deposit, and the Auction House does not take a cut of the gold for WoW Token sales. The standard deposit is designed to dissuade players from spamming the auction house with items that aren't selling, and the standard cut is designed to dissuade players from buying and reselling items for minuscule markups. These issues don't apply to the WoW Token, so there's no need for a deposit or cut.

As of February 6, 2017, the overall maximum has been removed.[10] The rest of the information in the 2015 blue post remains current.

As many players are aware, there are certain limits in place regarding how many WoW Tokens can be purchased per Battle.net account, both from the in-game Shop and through the Auction House. Today, we’d like to provide a quick update on the current limits to help you better plan your Token purchases.