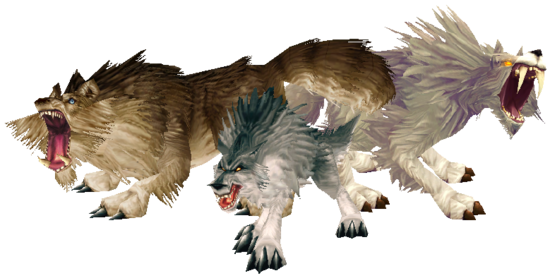 Wolves are carnivorous, furry, canine beasts that often run in packs. Wolves encountered in the wilderness are typically hostile and attack characters that approach them too closely. They can howl loudly enough to be heard for miles.[1]

Wolves are indigenous to many parts of Azeroth. They live on every known continent and have a wide variety of subspecies and social habits. Although most are hostile toward anyone who trespasses on their territories, a few unique dire wolf packs have befriended the Horde in recent years. These cunning and ferocious creatures have found an especially welcome home among the orcs, who admire their endurance and keen survival instincts.[2]

Draenor gave rise to its own separate species of wolves that developed independently on that world. Many survived Draenor's destruction and transformation into Outland and can be found in Hellfire Peninsula, Terokkar Forest, and Blade's Edge Mountains.

The dire wolf was once thought to be extinct except in the far north. It is highly sought by those preparing for winter.[3] Similarly, another species of dire wolf found on Draenor, the

[Smoky Direwolf], is believed to reside mostly in the north and hates weddings.[4][Note 1]

Wolves and the Horde 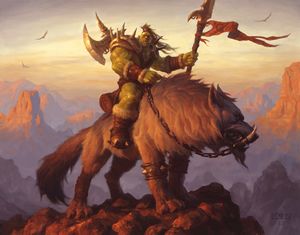 An orc and his wolf

A timberwolf in Warcraft III

The wolves of the Horde are befriended, not domesticated,[5] and are a major symbol of the Horde, especially to the orcs. Long ago, the orcs tamed the large and swift wolves of Draenor. These massive canines came to be the orcs’ chosen companions as well as their favored method of transportation. The wolves’ unflinching temperament made them especially well-suited for battling large prey. When the orcs became more warlike and invaded Azeroth, their wolves were bred for size and stamina so they could bear armored riders into battle. Dire wolves remain the favored mounts for orc fighters and can be purchased in the Valley of Honor in Orgrimmar.[6] They serve as guards, scouts, pets, and partners. The large cousins of the wolf, the worgs, are used as the orc mount.

Orcs and other Horde shamans hold them in high regard. They can speak to them and summon spectral wolves, and some serve a giant wolf spirit.[7] According to Takrik Ragehowl, this "Lo'Gosh" is simply another name for the great white wolf Ancient the night elves call "Goldrinn". The attire of orc shaman often feature wolves, especially headgear in the form of wolf heads.

The frost wolves in Alterac followed the Frostwolf clan from Draenor.[8] Two giant wolves, Duros and Drakan, guard their chieftain.

For a brief time, many orcs would declare themselves "hungry like an Orgrimmar wolf." Some blood elves still use the phrase ironically.[9] Black War Wolves are prized by Orgrimmar guards for their keen sense of smell.[10].

At Warchief Hellscream's command, Horde trainers began raising wolves to thrive in the shock and ferocity of sustained combat.[11] The Kor'kron use only the mightiest wolves for their mounts, bedecking them in armor that would break the backs of lesser creatures.[12] 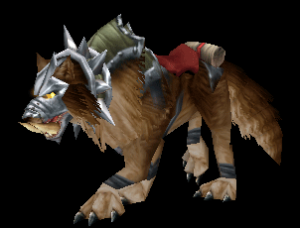