The wolvar are a primitive race of wolverine-like humanoids who inhabit the frozen continent of Northrend, and their tribes can be found in the Howling Fjord, Dragonblight, Zul'Drak and Sholazar Basin. Despite their smaller stature, the wolvar are some of the most aggressive creatures in Northrend. This often makes their curious nature intimidating.[1] Brann Bronzebeard believes they may be derived from a badger Ancient of some kind, but cannot confirm it due to the Tribunal of Ages entry being corrupted.[2]

The perhaps most famous wolvar tribe is the Frenzyheart Tribe, who have settled in Sholazar Basin due to being driven from their lands by the undead Scourge. Unlike most other tribes, who tend to be territorial and hostile to outsiders, the Frenzyheart are willing to work with adventurers of the Alliance and Horde in the fight against their mortal enemies, the collection of gorloc tribes known only as the Oracles. 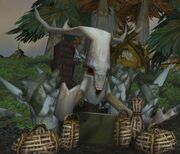 A shoveltusk shrine on Cauldros Isle, home to the Howling tribe.

The wolvar are generally hostile to other races and are fierce fighters that do not hesitate to defend their territory. Each tribe has its own independent leader and goals, but they are sometimes capable of diplomatic relationships with outsiders. Most wolvar shun arcane magic and instead focus on being warriors, hunters or shaman,[3] and though they may appear primitive at first glance, the tribal leaders of the wolvar are often very powerful in the latter discipline.[4]

The wolvar appear to worship different creatures for one reason or another, most notably the yeti known as Kartak the Abominable. They also seem to worship shoveltusks, proto-dragons and even robots, as shrines and altars to these creatures can be found in many of their villages. 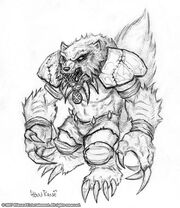 [Curious Wolvar Pup] is mailed to the player after completing

[50] Back To The Orphanage during Children's Week.