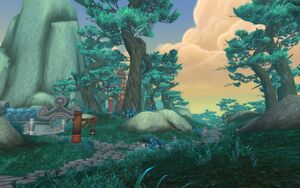 The Wood of Staves is a grove found to the far west on the Wandering Isle, that only the worthy pandaren are allowed to enter. This is determined by proving oneself worthy to the Guardian of the Elders. A cruel breed of forest sprite lives here.

This grove is the final resting place for pandaren elders, beginning with Liu Lang, the first explorer to leave Pandaria. He likely traveled to that particular spot because it also happens to be the closest point of the land where one can be near and see the head of Shen-zin Su. Planting the umbrella he always carried, he sat beneath its shade and became one with the land. With his death, his umbrella sprouted flowers and grew roots, turning it into a tree.[1] For generations since, the elders have planted their staves here; the most recent was Master Shang Xi.

The Wandering Isle branch of the Stormstout family are also buried here in a part of the grove, and like many others, have a family shrine there.[2][3]