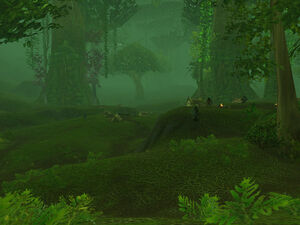 The Woodpaw Hills is a forest in southeastern Feralas. It's here the gnolls of the Woodpaw clan make their home, however, they're being driven out by the "bugs" that have burst through the ground in the southeastern most area of the hills in an area now called the Writhing Deep.

Recently mountain giants have arrived in the area, although

[37] Mountain Giant Muisek states they came down from the mountains to aid the night elves when the Burning Legion attacked. These giants, unlike the Cliff Giants in west are hostile to the Horde.

The Woodpaw Alphas that lead the tribe were once found in the camps, they can now be found only in the Woodpaw Den.