The Woodpaw clan[1] of gnolls is native to Feralas. They have been seen as a danger to both the night elves and tauren in the forest, and adventurers are often sent to combat the menace. These gnolls can be found in northeastern and southeastern Feralas.

They were led by their alphas[2][3] as well as a matriarch.

They posed a threat to the Horde's Camp Mojache as they began spreading and became more savage[4] very likely because of the Zukk'ash silithid.[5] When Raschal the Courier was in the Feralas forests, he ran into the Woodpaw gnolls.[6] They took his backpacks.[7]

After the Cataclysm, the Alliance entered their lands and built a camp there.[8]

At some point after the Cataclysm, the Woodpaw gnolls drove Hackle away because he was too small to be a brute. After that, he was captured by the Gordunni ogres and brought to Dire Maul to fight as a gladiator.[9] It's also implied that the gnolls were being enslaved before that.[10] The Woodpaw were driven east to the area near the Thousand Needles border by the Gordunni, who cut down the trees and drove out their hyenas and game in their old territory.[11] There, they set up a new Woodpaw village.[12] The ogres' actions also drove the Woodpaw into conflict with the Feral Scar yetis, who had also been driven east by the deforestation. The conflicts resulted in the deaths of their two previous matriarchs and brutes. As such, they no longer have a matriarch to lead them, so Jaggal the brute proclaimed himself to decide for the Woodpaw. He hopes that his daughter Sivet would become the new matriarch.[13]

Eventually, the yetis allied with the gnolls to battle the ogres together. To celebrate the new alliance made possible by Aram and his group, the Woodpaw village hosted a feast for them.[14]

The Woodpaw clan responded to Makasa Flintwill's letters asking them to assist in Aram's rescue from the Hidden citadel in Hellfire Peninsula on Outland. After Feral Scar secured pirate ships, Jaggal, Sivet, and other gnolls and the yetis were transported into the Eastern Kingdoms and reunited with their friends in the Dark Portal valley in the Blasted Lands. After entering Hellfire Peninsula, a few of their fastest gnolls were chosen to scout ahead to Falcon Watch. Upon marching the army, the yetis and gnolls fought together in front of the citadel against the Burning Legion demons. Ultimately, the Azerothian army was triumphant, defeating the majority of enemies.[15] 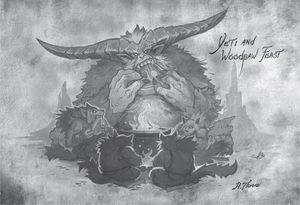