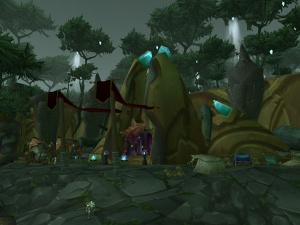 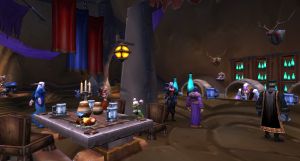 During the Kirin Tor Tavern Crawl.

World's End Tavern is an old ruined draenei temple in the Lower City of Shattrath City that has been converted to a shelter for various sundry individuals and war refugees. It is run by Shaarubo.

It can be visited during the Kirin Tor Tavern Crawl. The local specialty is the

Transport to the Caverns of Time

By speaking to the high elf woman, Zephyr, inside the tavern, those who are revered or above with the Keepers of Time can transport to the Caverns of Time.

Since patch 2.4.3, the Elite Tauren Chieftain perform in the World's End Tavern every three hours on the hour, eight shows per day. They play "Power of the Horde".