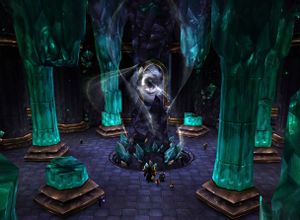 The World Pillar is a titan-made stone which is inside the Temple of Earth in Deepholm. It bears the weight of all the elemental and magnetic forces in the Elemental Plane.

The shamans of the Earthen Ring, feeling the distress of the planet, work to repair the damage Deathwing caused. Thrall gave the title of Warchief of the Horde to Garrosh Hellscream while he and other shamans like Nobundo and Muln tried to stabilize the rift within the Maelstrom, keeping Azeroth from collapsing into the Elemental Plane. Forces of the Horde and Alliance joined forces with the Earthen Ring to repair the World Pillar. They battled the Twilight's Hammer in Deepholm to recover the missing pieces. Rather than joining Ragnaros and Al'akir, Therazane the Stonemother chose to side with the mortals to prevent her enemies from taking her realm, or even, its eventual collapse.

The World Pillar was eventually repaired by the Earthen Ring shaman with minimal casualties.