For the classic server option dedicated to emulate the original experience, see World of Warcraft: Classic.

World of Warcraft, often abbreviated as WoW (or, when referring to the original game, vanilla, classic, or pre-BC), is a massively multiplayer online roleplaying game (MMORPG) developed by Blizzard Entertainment and released on November 23, 2004, on the 10th anniversary of the Warcraft franchise, three years after its announcement on September 2, 2001.[2] It is the fourth released game set in the Warcraft universe, and takes place four years after the events of Warcraft III: The Frozen Throne.[3]

Four years after the Battle of Mount Hyjal, tensions between the Alliance and the Horde begin to arise once again.[4] Intent on settling the arid region of Durotar, Thrall's new Horde expanded its ranks, inviting the undead Forsaken to join orcs, tauren, and trolls. Meanwhile, dwarves, gnomes and the ancient night elves pledged their loyalties to a reinvigorated Alliance, guided by the human kingdom of Stormwind. After Stormwind's king Varian Wrynn mysteriously disappeared, Highlord Bolvar Fordragon served as Regent, but his service was marred by the manipulations and mind control of the black dragon Onyxia, who ruled in disguise as a human noblewoman. As heroes investigated Onyxia's manipulations, ancient foes surfaced in lands throughout the world to menace Horde and Alliance alike.[5]

There have been seven expansions to World of Warcraft:

Additionally, World of Warcraft: Classic, released on August 27, 2019,[13] provides a way to experience the game as it was before any expansions.

Over time, the game's expansions have been integrated into the base game. With the release of Battle for Azeroth, all World of Warcraft subscribers (or those with game time) automatically have access to all of the content and features of all the expansions up to Legion at no additional cost. The Battle Chest is no longer in production.[14]

Further story development is also made throughout its franchising, via online media, novels, comics, manga, RPG books, Trading Card Game, and board games. 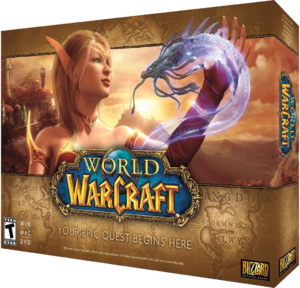 The new digital edition of the World of Warcraft Battle Chest. 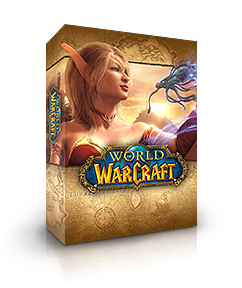 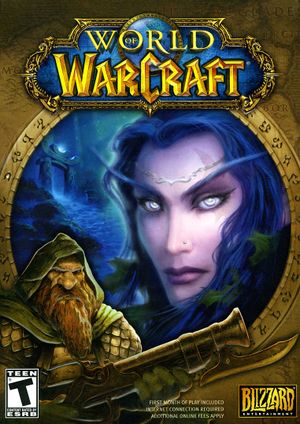 A original box cover for World of Warcraft

World of Warcraft's subscriber numbers have fluctuated tremendously over the years. With a peak of 12 million monthly subscribers in October 2010,[15] World of Warcraft remains among the most popular MMORPGs[7][16] and holds the Guinness World Record for the world's most popular subscription-based MMORPG.[17][18][19][20] Though World of Warcraft had dropped to 7.4 million subscribers as of the release of Patch 6.0.2[21], when the Warlords of Draenor expansion released a few weeks later it briefly jumped all the way back up to 10 million[22] before settling back down to 7.1 million.[23] In the final report in October 2015, there were 5.5 million subscribers.[24]

In January 2014 it was announced that more than 100 million accounts and 500 million characters had been created over the game's lifetime, with players in 244 different countries.[25][26]

The history of World of Warcraft has its origins in Project Nomad. Accounts differ as to the timing of this project, some stating that work began on it after the release of StarCraft,[28] others that development on the game had begun prior to the "crunch period" of StarCraft's development, and as a result, developers were transferred to work on the RTS game.[29] Nomad itself was to be a sci-fi squad-based shooter, some of its developers taking inspiration from Necromunda, others from Final Fantasy.[30] Those in the former camp conceptualized a squad-based game where players would build up squads of soldiers, upgrade their abilities, find new guns, and go online to challenge other players' armies. Those in the latter camp wanted an adventure/RPG game.[31]

Development of World of Warcraft was first announced in September 2001[32] at the ECTS tradeshow. There was little fanfare in the original announcement, and the original development team consisted of around fifty individuals.[33] Inspiration was taken from other MMOs such as Ultima Online and EverQuest, using the lore and characters of Warcraft as the basis for the setting. It would be a risky venture, as the company had grown used to games passing the 1 million sales mark, whereas EverQuest had peaked at the 500,000 subscriber mark. While a subscription fee would help recoup costs, there was unease as to whether the game's reception would be as positive as Blizzard's previous games,[34] and it was thought that the game would only appeal to pre-existing Warcraft fans.[33] Furthermore, few members of Blizzard had experience in developing MMOs, and while they enjoyed playing them, there was fears that the game would be overshadowed by Star Wars Galaxies and EverQuest 2. When the game was first announced, members of the press often asked Blizzard as such, seeing them as "the RTS company."[35]

By 2002, the game's visual design was being worked on.[36] There was initial pushback in Blizzard as to the Alliance/Horde faction divide, as some feared that some players wouldn't like it because they couldn't play with friends (if they chose different factions).[37]

The game originally had a true to life day-night cycle, which dictated when events and spawns would happen. This idea was scrapped so that players wouldn't have to disrupt their real lives to do these time-specific activities.[38]

The game had a significant "crunch period" of development.[39]

The game released in late 2004. Surpassing expectations, the game had reached 5 million subscribers by the end of 2005. Blizzard had to develop tech and customer support on the fly in order to keep up with the demand.[34] Not only was it well received by the critics,[40] but it also became the best selling PC Game of 2005 and 2006.[41] It was recognized at the 2005 Spike TV Video Game Awards where it won Best PC Game, Best Multiplayer Game, Best RPG, and Most Addictive Game.[42]

In 2007, Blizzard predicted that the game would last for five more years, which spurred them to develop Titan as their successive MMO.[43]

As of 2014, Blizzard's intended development pattern is to keep content at a relatively steady pace—still producing expansions, but with shorter gaps between content implementation.[44] The game has been likened to a sandbox with content being added over time.[45] Expansions are planned out in advance, with narrative threads in one expansion leading to events in the next.[46]

The system requirements for the game evolved a lot from it's original version. Details of this evolution, and the current requirements, can be checked on this article.

And many creatures are added in each World of Warcraft expansion:

The gameplay video displayed is the first, released on November 23, 2004. Other videos were also made before the European release.