World of Warcraft: Cataclysm (abbreviated as Cata), is the third expansion for World of Warcraft. Set primarily in a dramatically reforged Kalimdor and Eastern Kingdoms on the world of Azeroth, the expansion set follows the return of the evil Dragon Aspect Deathwing the Destroyer—formerly known as the ancient guardian Neltharion the Earth Warder—who causes a new Sundering as he makes his cataclysmic re-entrance into the world from Deepholm, the elemental plane of earth.

Cataclysm returns players to the two continents of Azeroth for most of their campaigning, after years away in Outland and Northrend, opening new zones such as Mount Hyjal, the sunken world of Vashj'ir, Deepholm, Uldum and the Twilight Highlands. It includes two new playable races, the worgen from the legendary kingdom of Gilneas for the Alliance, and the goblins of the Bilgewater Cartel from the isle of Kezan for the Horde. Among the many new developments in the expansion are the increase of the level cap to 85, the ability to use flying mounts in Kalimdor and Eastern Kingdoms, the introduction of the secondary profession Archaeology, and the debut of reforging, as well as updates to player classes, new race-class combinations, and a dramatic restructuring of the world itself (with major revisions to existing content from the original release of the game).

World of Warcraft: Cataclysm was officially announced on August 21, 2009 at BlizzCon 2009. The "friends & family" phase of the World of Warcraft: Cataclysm alpha began on May 3, 2010,[2] while closed beta began June 30, 2010.[3] Collectors' Edition content and pricing was announced on August 17, 2010,[4] while on October 4, 2010, Blizzard Entertainment officially announced the release date for the expansion: December 7, 2010, including for the first time a digital download edition at release.[1] On October 16, 2013, the expansion was integrated into the basic World of Warcraft package, granting all subscribers automatic access to all of the content and features of the expansion at no additional cost.[5] This expansion came in two versions: Standard Edition and Collector's Edition.

Before Cataclysm was announced as the official title of the expansion, it was known internally as World of Warcraft: Worldbreaker.

An ancient evil lies dormant within Deepholm, the domain of earth in the Elemental Plane.

Hidden away in a secluded sanctuary, the corrupted Dragon Aspect Deathwing has waited, recovering from the wounds of his last battle against Azeroth and biding his time until he can reforge the world in molten fire.

Soon, Deathwing the Destroyer will return to Azeroth, and his eruption from Deepholm will sunder the world, leaving a festering wound across the continents. As the Horde and Alliance race to the epicenter of the cataclysm, the kingdoms of Azeroth will witness seismic shifts in power, the kindling of a war of the elements, and the emergence of unlikely heroes who will rise up to protect their scarred and broken world from utter devastation. 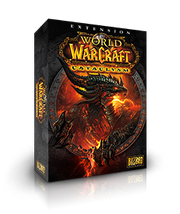 Unlike in the previous two expansions, The Burning Crusade and Wrath of the Lich King, there is no new continent/world for additional content; instead, Cataclysm returns players primarily to Azeroth itself, with seven new high-level (80-85) zones. Each of the five leveling zones features its own unique breadcrumb (introductory) quest and cutscene; afterwards, each is accessible quickly through portals in Stormwind City and Orgrimmar. Tol Barad is also available at level 85 via these portals.

Also included as a new zone, albeit unpopulated, is

Ahn'Qiraj: The Fallen Kingdom, the site of the above-ground level 60 raid dungeons Temple of Ahn'Qiraj and Ruins of Ahn'Qiraj. There has been no word as yet if this will continue questlines from Silithus, or simply marks flyover territory for flying mounts venturing into the area. In addition, the Maelstrom appears as a region on player maps; Deepholm, Kezan, and the Lost Isles appear as individual zones on the Maelstrom region map.

Map of the reshaped Azeroth.

Map of the new zones in Cataclysm. Not to scale.

There were seven new dungeons included as part of the Cataclysm general release, with both regular difficulty versions (levels noted below) and heroic difficulty content to be encountered at level 85:

Cataclysm shipped with three end-game raid dungeons and a PvP-unlocked raid dungeon (in the same style as the Vault of Archavon), each with both 10 and 25-man settings; patch 4.2 and patch 4.3 each added one additional raid. Once the final boss of each has been defeated, players can set each boss to heroic mode (as in Icecrown Citadel).

Numerous new factions are introduced in the expansion, and like in previous expansions feature quartermasters selling gear and other faction perks. New factions for end-game and leveling content include the following:

Several new options for player-versus-player gameplay are available with Cataclysm, including:

Both of the new battlegrounds released with Cataclysm will be rated, like arenas, and will provide the same rewards as arenas. New arenas are planned to be added with the expansion, but not directly at the release.

Among the many figures confirmed to have major roles in the story of Cataclysm are:

The Naga ruler and former leader of the Night Elves, Queen Azshara, makes a small but important appearance during the leveling process in the Darkshore region.

All of these combinations, excluding the goblin and worgen options, will be available to all players regardless of expansion level in Patch 4.0.3a.[6] Goblins and worgen are limited to Cataclysm purchasers.

Zones affected by the Cataclysm

These changes are not phased. The world-changing patch will happen in Patch 4.0.3a, not Patch 4.0.1 as believed earlier. They will be seen by everyone, from level 1 to 85, whether or not they buy the expansion.[22]

The new level flow for Lordaeron

Concepted but not added

The launcher has been updated to stream installation and patch data from the servers instead of being required to download it all before playing. The new launcher is broken up into three stages of download progress:

The updater and downloader have been integrated closely into the Launcher, resulting in less application switching when patching and installing.[24]

A new overlay appears whenever you gain a level.