“For my kind, the true question is - what is worth fighting for?”

Following the successful campaigns in Northrend and in the lands opened by the Shattering, and the deaths of the Lich King at Icecrown Citadel and Deathwing the Destroyer at the Maelstrom, the expansion refocuses primarily on the war between the Alliance and Horde, in the wake of the accidental rediscovery of the mythical and long-forgotten lands of Pandaria, a continent far to the south that has until now been shrouded in magical mists and touched by the ancient malevolence known only as the Sha. With both factions landing on Pandaria, adventurers rediscover the ancient pandaren people, whose wisdom will help guide them to new destinies; the Pandaren Empire's ancient enemy, the mantid; and their legendary oppressors, the enigmatic mogu. As conflicts heat up between the Alliance and Horde, the land changes over time, with subsequent patches having escalated the conflict between Alliance leader Varian Wrynn and the increasingly unbalanced Horde warchief Garrosh Hellscream... eventually leading to a schism within the Horde itself. As civil war wracks the Horde, the Alliance and forces in the Horde opposed to Hellscream's violent uprising join forces to take the battle directly to the enemy, leading to direct confrontation with Hellscream and his Sha-touched allies in the expansion's concluding showdown deep within the bowels of Orgrimmar itself.[3]

Shrouded in fog since the world was sundered more than ten thousand years ago, the ancient realm of Pandaria has remained unspoiled by war. Its lush forests and cloud-ringed mountains are home to a complex ecosystem of indigenous races and exotic creatures. It is the homeland of the enigmatic Pandaren, a race that celebrates life to the fullest even while under siege by an ancient menace.

The new continent reveals itself to a broken world just as the Alliance and Horde are spiraling ever closer to a war that will consume all of Azeroth. Will the mists of Pandaria part to reveal the world's salvation? Or will the battle to control this rich and breathtaking new land push the two mighty factions over the brink of war and into total annihilation? The answers await within Pandaria's mysterious shores!

As a first for Blizzard, the storyline for Mists of Pandaria will split into multiple chapters. The story arc that introduces Pandaria - where players will discover the continent and level up, helping to solve problems and figure out what happened for the past 10,000 years and why - will be included entirely within the initial expansion release. Later chapters in the storyline bring the war between the Horde and the Alliance back into focus, including changing parts of Pandaria (ostensibly via phasing) to show additional settlements, and eventually return the players back to the rest of the world for a final showdown with Garrosh Hellscream.[4]

The Mists of Pandaria pre-release patch (5.0.4), released on 28 August 2012, included the talent system revamp, amalgamation of mounts & pets across characters on the same account, and a level 85 version of the Theramore's Fall scenario leading into the Mists storyline.[4] 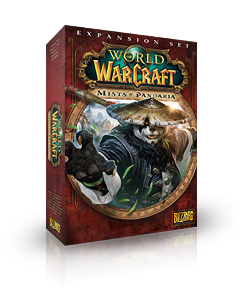 Pandaria is a single, unified continent, located south of Zandalari isles, influenced by Asian landscapes. There are eight new zones (along with a small mini-zone), most of which are on Pandaria itself, save for the starting area for the Pandaren.[3] Flying mounts on Pandaria are unavailable on the continent until reaching the level cap (90), as the designers wish players to be immersed in the world and enjoy the effort put into the continent while leveling, rather than just fly over it.

The expansion currently features nine high-level dungeons (six of which are new to the world and are found in the continent of Pandaria alone), three raids, and nearly a dozen scenarios (a game system new as of the Mists of Pandaria expansion). The new Challenge Mode option will require to complete dungeons as fast as possible to earn medals. The world bosses have also made their reappearance.

For the first time, Mists of Pandaria features Scenarios, small three-player queueable micro-dungeons, each with content and a final boss, to be completed at level 90. They are designed to progress faster than dungeon content.

There were two additional scenarios in the game files but not made available in the expansion: Peak of Serenity, set high atop the mountains of Kun-Lai Summit; and a scenario version of the Temple of Kotmogu battleground. Neither have been released.

The continent of Pandaria features a number of new factions with gear, schematics and vanity rewards. Blizzard's stated intent for these reputations is to be a more rewarding and less grindy process, in which reaching Exalted is something to be proud of.

In addition, there are several racial factions: