World of Warcraft: The Roleplaying Game

From Wowpedia
(Redirected from World of Warcraft RPG)
Jump to: navigation, search

In addition, the new game includes rules for adapting material from the previous game. However, some of the previous mechanics were deemed incompatible with the new system, or had been replaced with new versions which eliminated their use in the new series. A conversion document was released separately to assist players in the conversion process. World of Warcraft: The Roleplaying Game doesn't entirely replace the original core rule book, Warcraft: The Roleplaying Game, as it covers a separate time period in the Warcraft timeline and also contains new material related to a more recent point in history. 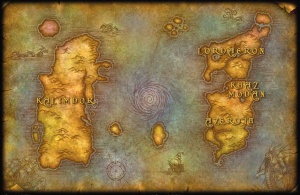