On the left of the character selection, you have the option to upgrade to a full account. 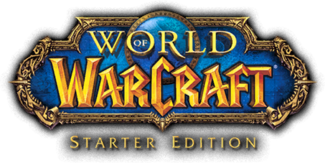 The World of Warcraft Starter Edition is a digital download replacement for the 10-day Free Trial and 14-day Free Trial, which is now for players who have not yet tried out the current expansion. The Starter Edition allows anyone to play for free up to level 20 without the time restrictions placed on trial accounts -- all you need is a Battle.net account and moderately fast internet connection.

As of mid-July 2011, all existing trial accounts, including expired ones, have been reactivated.

The Recruit-A-Friend program has been upgraded as a result of the changes introduced with the Starter Edition.

With Patch 6.1.0 Players that have lapsed accounts will have their profiles reverted to a mode similar to Starter Edition with almost the same restrictions, unofficially called 'Veteran Edition'. The difference between the Starter Edition and the Veteran Edition is that characters below level 20 will be allowed to join a guild if the player still has some characters that are current members of that guild.[1]

New features over the old trial: 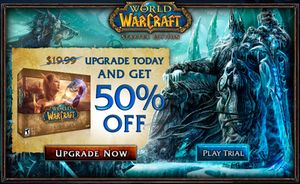 Blizzard offering a discount for the battle chest upgrade.

Realms with login queues will also give priority to customers with a subscription or game time.[2]

Note that as with all regular accounts, when your paid time runs out, you will lose access to the characters who are above level 20 due to Starter restrictions.

Despite its limitations, a Starter Edition player can still be able to make decent progress in the game world. Such a character should be able to complete at least 600 quests, especially if they travel to all low-level areas controlled by their faction and complete their quest chains.

A persistent player with good gear can also complete some of the quests in the 20-25 level areas such as Ashenvale, Hillsbrad Foothills, Wetlands, and Duskwood.

A very brave and stubborn player might as well visit higher level areas, though the only thing they could possibly do there is exploration and sightseeing. Exploration usually entails a high number of deaths, yet successful revelation of the entire map will award an Achievement.

Enemy low-level areas can also be explored, as long as players stay away from the roads (to avoid any Alliance/Horde patrols) and popular player gathering areas (e.g. Goldshire, Razor Hill, etc.). Revealing an enemy race's starting zone will most times require 1 or 2 deaths (a level 20 character cannot survive against Elite guards for more than 1 second), though some starting zones has breaches from where to pass.

Starter Edition players can do cooking and fishing daily quests at capital cities without restrictions. This is a good way to earn some achievements and increase reputation with other factions in order to be able to buy their racial mounts at Exalted.

Use for active players

You can have an inactive World of Warcraft account and have an active starter edition account. Some players who don't want to or cannot afford to pay for World of Warcraft for whatever Real Life reasons will keep these accounts to play a little when the bug hits them, or see how the game is going.

These accounts are also helpful for players with young children who want to play the game. The account is free, so the parent does not have to pay an extra fee per month. The children cannot be invited to a guild, etc. by people who spam level one characters with guild invites. The children can still group with their parents and do quests just like in a normal party. Remember though that World of Warcraft is a 14+ game so always supervise your young children when they are playing.