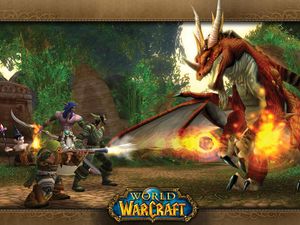 This evolution guide serves as an archive of anecdotes, trivia, and other interesting facts about the many game design shifts World of Warcraft had during the long years between its alpha stage and now. Some areas were cut before being released, game balance was completely overhauled several times, Cataclysm wiped the state clean on two continents.

The game itself started as a rescripted modification of the Warcraft III: Reign of Chaos engine,[1] and the project was already started in 1999, 3 years before the eventual release of Warcraft III itself. Before the game's release, RPG books such as Lands of Conflict had already mapped out and described part of the content that was to appear in World of Warcraft in the years after.

However, time has a tendency to warp memories and old websites can die down, and as such some of these facts can't be proven with references anymore, so take any "citation needed" statement with a grain of salt. Note that this list was compiled from the works of many users, and each of them should be thanked for their efforts. Still, the topic is immense, and more researches/updates on this article would be warmly welcomed.

While not necessarily harder, the combat system back then involved more number-crunching than presently, with more secondary stats and less streamlined itemization.

During the early years of the game, inventory space was much more limited than now.

At release, many "quality of life" features were yet to be implemented. 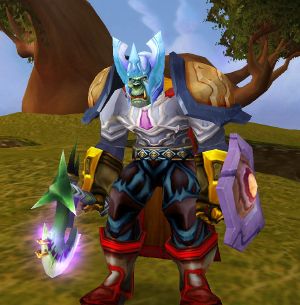 Quest design was less streamlined and cinematic than currently due to the lack of phasing and scenarios. Furthermore, many high-level questlines forced players to travel back and forth all over the world in order to complete them, and before the addition of quest markers, some quests like

[60] The Ancient Leaf were notorious for their cryptic directions (or lack thereof). The adventurers were originally treated more like anonymous mercenaries by NPCs, it was only in Wrath of the Lich King that they started to be recognized for their deeds. Cataclysm completely revamped the quests of the two original continents in order to bring them more in line with modern quest design.

Mounts were originally handled by players in a more "personal" way, mainly because they were rarer and harder to acquire. Players usually kept to one mount and for a long time.

At release, it usually took much longer to do things compared to now. Leveling up was longer, reputation grinding was harder, money was sparser. 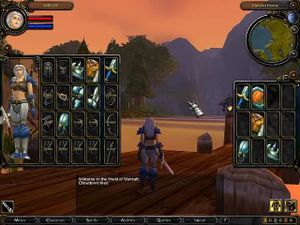 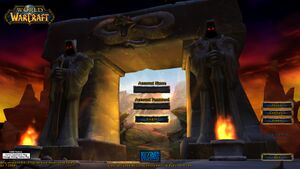 Alpha login screen with a different design for buttons.

World of Warcraft's user interface was designed to be simple and easy to understand, similar to Diablo II.[12] While already customizable, at release the UI lacked several features that now seem essential: 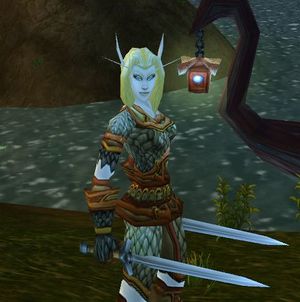 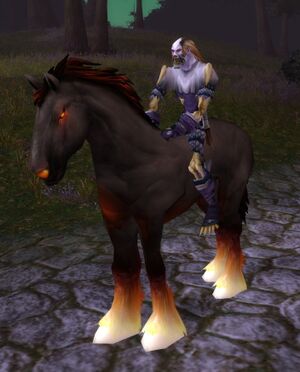 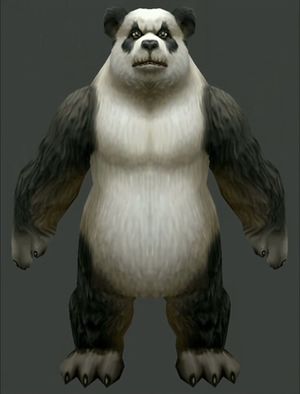 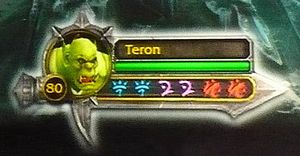 Light force and dark force, as depicted at BlizzCon 2011. 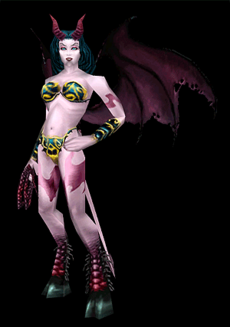 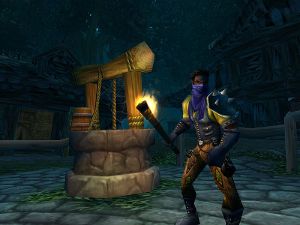 During the game's original development, the designers made a distinction between professions and "minigames" like Fishing. While professions were planned out early on, minigames had to be implemented using extra code, and as a result there were several planned minigames that didn't make the cut to the final game.[46]

Other professions and minigames 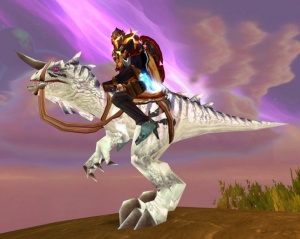 [Whistle of the Ivory Raptor]. 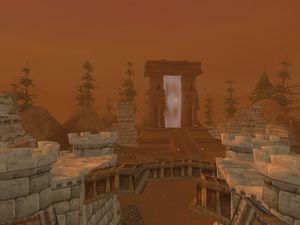 Caer Darrow during the alpha.

The game was originally planned to launch with around 6 major continents.[12] This was eventually downscaled to only two: the Eastern Kingdoms and Kalimdor. 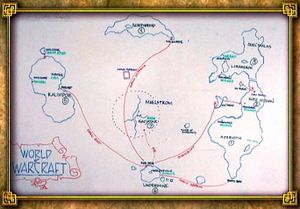 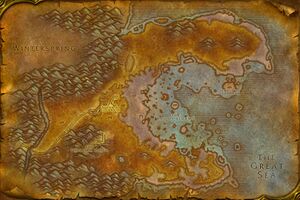 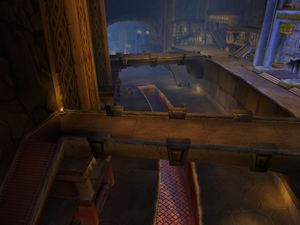 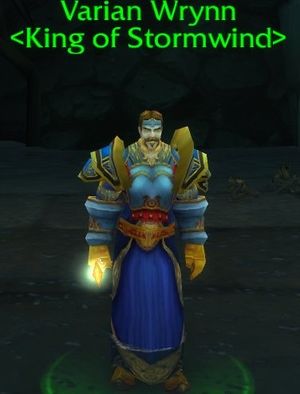 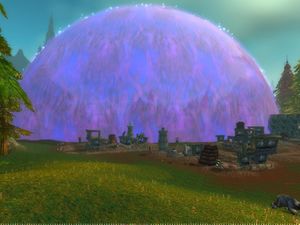 Swamp of Sorrows and Temple of Atal'Hakkar

Tanaris, Zul'Farrak and Caverns of Time 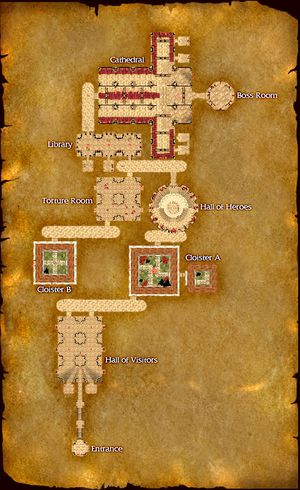 Old Scarlet Monastery before being split into four instances.

Outland was originally planned to be accessible from level 54 and above,[68] which later got changed to level 58.

Wrath of the Lich King zones 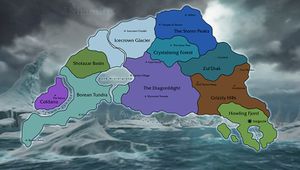 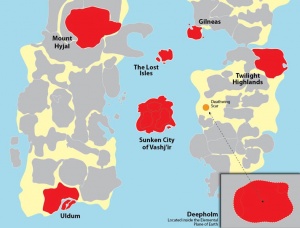 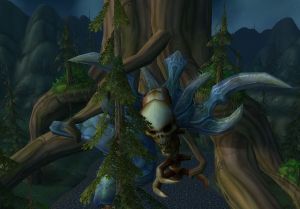 Vashj'ir and Throne of the Tides 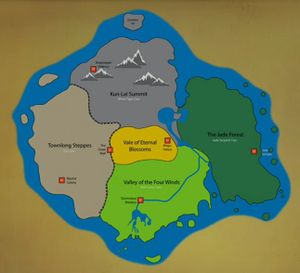 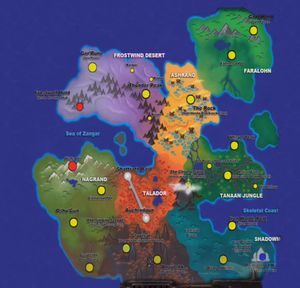 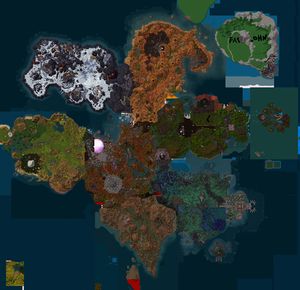 The Draenor satellite map during alpha. 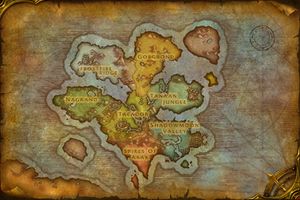 The Draenor world map during beta. 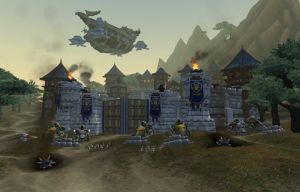 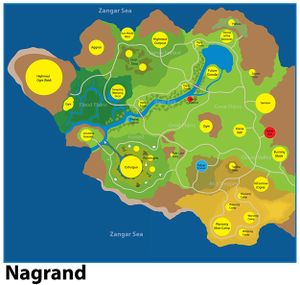 Broken Shore and Tomb of Sargeras 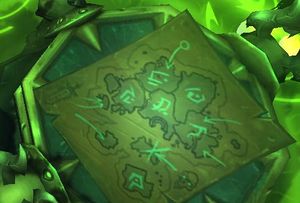 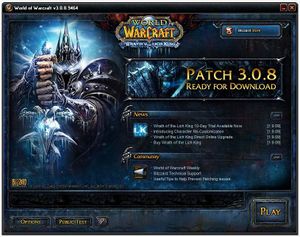 MMO-Champion - Some things you didn't know about WoW...