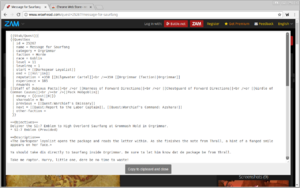 Install this extension into your browser:  Firefox  Chrome

Like all extensions, it should be periodically automatically updated. To update manually, open your browser's extensions page and select "Check for updates" (Firefox) or "Update all extensions" (Chrome).

WET will load information from the page and convert it to wiki markup, which will be displayed in the large text area. Click Copy to Clipboard, then paste the wiki text into a Wowpedia article in the browser.

You can post bug reports and feature requests in the GitHub issue tracker or on the talk page here on Wowpedia.

QuestFiller was a Java application that predated the WET browser extension and had the same functionality, but was less convenient to use.

It is no longer updated. Previous releases can be found at the GitHub releases page.