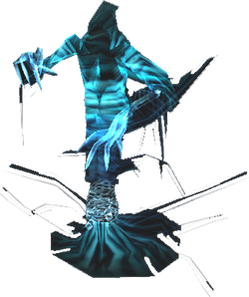 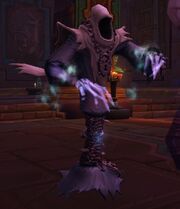 Wraiths are spirit-beings who are similar to ghosts, banshees, and shades in that they are the spectral remains of a once-living person. Wraiths appear to be of either elven or human origin most of the time. Some trolls in Zul'Gurub and the Temple of Atal'Hakkar manifest as wraiths before they die. Wraiths appear as translucent shapes with a roughly humanoid shape, although notably missing legs, and chains symbolically binding them to this life. They are typically either bluish or purple, and when they are killed, all that is left is a small orb.

Strangely, despite being visually distinct in WoW, creatures that use variants of the shade model are often called wraiths, like the arcane wraiths, the voidwraiths, and the "arcane voidwraith" model. Also, two of the variants of cold wraith have looked like shades, even with some looking like true wraiths.

The Lost of Lordaeron find their undead neighbors to be poor company, so they typically wander Tirisfal Glades alone.[1]

Wraiths appear as neutral banshee creeps alongside the weaker Ghost creeps. The Tome Wraith was a unique creature fought in the Warcraft III Demo. Wraiths were also mentioned a few times as being a part of the Scourge.

The wraiths of a spirit tower attack with supernatural efficiency, and quickly add enemy forces to the ranks of the dead.[2]

Shades are called "vile, wraith-like creatures",[3] and "an invisible wraith".[4] It is unknown if they are a type of wraith or just similar to them. 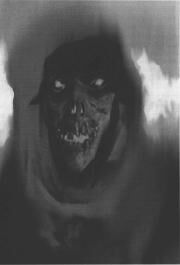 Wraiths retain their individuality and intelligence.[5] Wraiths are angry and violent spirits, long for a return to mortal life and vent their jealous rage on living creatures. While possessed by a constant, desperate fury, wraiths nonetheless possess the intellect and self-control to deal rationally, if grudgingly, with mortal beings on occasion.[6] These creatures are self-motivated and cunning and have all the memories of their past lives before undeath. Those memories no longer move the wraith nor provide any sense of morality other than a strict adherence to the wraith's own code of honor and law. Wraiths are lawful creatures, willing to make deals and hold to them. They respect the same tendency in both living and unliving creatures and will respond to honorable opponents with honorable actions. It is not unusual for a wraith to accept a creature's surrender; however, those surrenders will always be unconditional. Further, those foolish enough to surrender to a wraith are simply placing themselves into a position where they will almost certainly be turned into wraiths themselves.[7]

Wraiths fight well in units under the command of a necromancer, but if not so commanded, they prefer to fight alone. They are intelligent and cunning and will use the extent of their abilities to capture and destroy their opponents.[7] Wraiths begin a combat by using their spell-like abilities. They attempt to dominate or possess anyone who appears able to turn undead; next they target an enemy force's apparent leaders. Should the domination and possession fail, a wraith instead curses these targets. Only after it has expended all its spell-like abilities does a wraith enter melee combat.[6] In some cases, they will keep extraordinary enemies alive, preferring to turn them into wights and spread the plague to other "capable" individuals.[7] Wraiths speak the languages they did in life.[7]