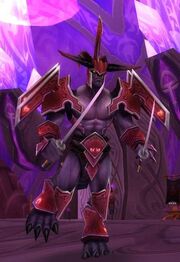 “I find myself thankful that I never encountered these demons during the Third War.”

The demonic wrathguard[2][3] (or wrathguards)[4] are members of the man'ari eredar species loyal to the Burning Legion. Cunning and precise, the wrathguard often protect the Legion's leaders as honor guard.[2] Their skill in battle should never be underestimated.[5] Elite[6] front-line troops,[7] they are often seen wielding two weapons with equal measure.[6] They have long tails, digitigrade legs, a double set of horns, and a formidable suit of armor.

The key to binding a wrathguard is ironically reducing the number of runic symbols used in the summoning circle. Wrathguard are highly resistant to charms and compulsions, but readily respond to basic expressions of strength.[8]

The source of the wrathguard's clawed feet, features also seen in Lost Ones, raise a number of questions. Corruption caused by fel energies may be the cause of this mutation, as seen in the Broken and Lost Ones, or it may be an intentional augmentation made to wrathguard in order to increase their mobility.