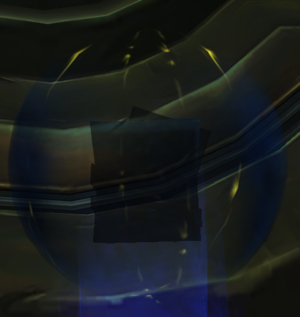 Wrathion's Recorded Journal is located in the Chamber of Heart.

As I suspected, little of what the Shen'dralar collected in their archives survived their flight from Eldre'thalas. Still, there was some knowledge to be gleaned from the tomes they were forced to leave behind as they escaped the Horde's aggression. References to the Old Gods are vague and oblique, existing only as archaeological footnotes from a time before the Sundering. Even the Shen'dralar, adept in the arcane arts as they were, could not completely unravel the intricacies of the Black Empire's dark magic. Yet a few of them did dabble in the Void, and the lessons they learned grant me hope that N'Zoth's own power can be wielded against him.

Even in its abandoned state, the library's meticulous organization truly impressed me. If only more of it had remained intact. Such an extensive loss of wisdom is lamentable. The Shen'dralar toiled ceaselessly to collect the librams that lined their bookshelves, only for the lion's share of it to be consumed by the flames of war.

But such is the nature of warfare, is it not? Seldom does it accomplish the intentions of its architects, and never without leaving immeasurable devastation in its wake... especially when the Horde and the Alliance are the forces in conflict. Can one ultimately say that victory is worth the price that must be paid to achieve it?

Perhaps it is, in some cases. But the verdict is not as easily reached as I once thought.

For all the time I have spent in Pandaria, only recently did I make acquaintance with the Lorewalkers. The sheer volume of knowledge to be found within their scrolls was marvelous to behold. Lorewalker Cho taught me much about the legends of the Black Empire. He can be... shall we say... long-winded at times, but the wisdom he can impart upon those with the patience to listen is valuable indeed.

The Shado-Pan, in contrast, have little time for conversations not directly related to the defense of the pandaren. Their Omnia scholars have accumulated centuries of practical expertise in combatting the dark powers of the sha without succumbing to their influence. Given that the sha originated from the essence of Y'Shaarj, the underlying principles of their techniques could prove effective in resisting the whispers of the Old Gods.

I must admit, I felt a certain kinship with the Shado-Pan that I did not anticipate. The pandaren do not maintain a standing army, and so the Shado-Pan serve as their sole defense against both the mantid and the sha. Though they have trained themselves to seal away their emotions, there is an air of solitude about them that I recognize all too well. It is no easy task to stand alone against the darkness so that others may bask in the light.

But someone must always make that stand. And they can never allow themselves to falter.

Few mysteries intrigue me more than the lost knowledge and technology left behind by the titans. The zeal with which I pursued their secrets in the past may have bordered on excess, but the quest in and of itself is one that must be continued. I know for certain that the Forge of Origination is the key to dealing the Old Gods their ultimate defeat, though I have not yet been able to discern the exact manner in which it is meant to be used.

My hope was that the Vault of Archavon would hold the answers I seek. Unfortunately, though the Vault contained much material for me to study, the giants who make it their home were... less than cordial to me upon my arrival. I cannot say I blame them, given their previous encounters with "visitors" from the Alliance and the Horde.

It is strange to think on how those events predate my own hatching. While I plumb the depths of forgotten lore from eons past, others have lived through crises I will only ever know from historical accounts. There must be someone on Azeroth who possesses the understanding I require, and perhaps my next course of action should be to seek them out.

A pity the former Aspects are so reluctant to trust me. Even after all my research, their familiarity with the titans' handiwork surely eclipses my own. But given the troubled history of my dragonflight... of Deathwing, Onyxia, Nefarian... and myself... I cannot say I blame them, either.

It is impossible to set eyes upon Karazhan without reflecting on the dark saga of its master As befitting his title, the Last Guardian of Tirisfal had amassed a vast collection of writings and artifacts that dwarfs even that of the Kirin Tor. The insight I gained from the tower's library allowed me to reach a significant milestone: I have concocted a tonic that, when imbibed, will cleanse a minor amount of the Old Gods' corruption and silence their whispers. Such is merely the first step on the path to defeating them once and for all, but it warrants celebration, nonetheless.

Though I knew there were valuable lessons to learn in Karazhan, I did not anticipate that some of them would emerge from my conversations with Medivh's lingering spirit. He recounted his struggles under Sargeras's influence as the dark titan twisted his soul from within, and I was left to wonder if similar thoughts plagued Neltharion as he descended into madness himself. But Medivh also spoke of his spirit's return to the mortal realm, and how it guided Azeroth's champions in the fight against the very forces that once corrupted him. He said something on which I ruminate even now: "I can never change the actions of my past," he told me, "but I can forge a new legacy to leave behind."

A new legacy. In the end, perhaps that is what I am truly after. A way to make amends for my father's failings... as well as my own. A legacy worthy of the black dragonflight's original sacred charge: the defense of Azeroth. The end of the Old Gods.

I do hope these pages have proven to be of use to you, <name>. I would hate to think my agents wasted their time delivering them to you as instructed. Rest assured that when the time is right, you will have my aid in the fight against N'Zoth. In the true battle for Azeroth.

Oh, and one last request: Burn this journal. It is time my actions speak for me.