Not to be confused with Vrekt.

The Wrekt are a group of hostile Broken, part of whom were enslaved by Illidan's Naga in Zangarmarsh. The Wrekt aren't using the resources in their midst.[1] Those that remained free have allied themselves with the Firewing blood elves and Lost Ones of Tuurem. 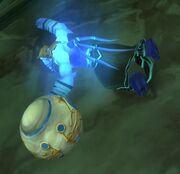 The Wrekt in Zangarmarsh are being enslaved by the Bloodscale naga,[2] a faction within Illidan's forces, and are used to lumber mushrooms. Those in Tuurem have allied themselves with the Firewing blood elves who serve Kael'thas.[3][4] Ironically, the ones that went free allied themselves with the same master that enslaved their brethren, as both Vashj and Kael'thas are supposed to serve Illidan (though Kael'thas serves the Burning Legion now).

The Firewing are using the Wrekt of Tuurem as smuggling go-betweens for the creation of the Mana Bombs.[3][4] Empoor, a Broken merchant, gave the Wrekt boxes of[5] bomb parts[6][7] from another dimension[8] received from the ethereal Wind Trader Lathrai;[5] these boxes were then taken by Firewing Couriers and delivered to Firewing Point.[9]

When a Mana Bomb was completed, one Broken was sent as a suicide mission to destroy the Cenarion Thicket by detonating the bomb. The Broken succeded and killed all the druids except three — Warden Treelos survived the explosion, but went mad, Earthbinder Tavgren was away on a survey of the Bone Wastes when the explosion occurred,[10] and Isla Starmane that was sent to a diplomatic mission with the Firewing blood elves.[11][12] As a consequence of the bomb, a strong field of residual energy was left in the area and the nearby teromoths became vicious as they were infused with pure mana.[13]

An unreleased quest says that the Wrekt are the masters of the Lost Ones of Tuurem.[14]