The Wretched are elves (usually blood elves) that failed to control their innate addiction to magic, overindulging in arcane sources to the point of deformity and, often, insanity. Obsessed with obtaining and devouring magic, they are a danger to both themselves and others, and are usually too violent to surrender.[1]

The Wretched are thin elves with thinning dark hair, a large bony forehead, claw-like fingers and toes, blue eyes, and strange growths on their backs that glow with an eerie blue light. With the recovery of the Sunwell and Kael'thas summoning the Burning Legion, a new type of Wretched appeared.[2] After the events of the war against the Lich King, some high elves also became Wretched. 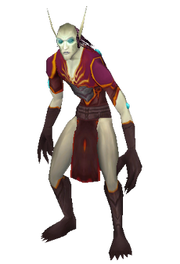 The Wretched are currently scattered throughout Eversong Woods and lack any general leadership, but a few notable Wretched have stepped up and organized raids. The Wretched have infiltrated the Ruins of Silvermoon, Sunsail Anchorage, and even Falthrien Academy on Sunstrider Isle. Though considered more of a pest than a true threat in blood elf society, the Wretched represent a failure to reach the equilibrium between deficiency and overindulgence that all blood elves strive to maintain, and serve as an important reminder of the dangers that overindulging in magic can present.[3] This "kind" of blood elf is believed to be relatively new, considering the fact that they can only have existed since after the corruption of the Sunwell.

Gershala Nightwhisper feared this transformation might occur before the events of The Burning Crusade. He even sent adventurers in Blackfathom Deeps to get corrupted brain stems from naga and satyr. The Wretched can be compared to both naga and satyr because their magical dependence caused them to undergo physiological changes. Unlike those two races, this transformation can occur in an instant as soon as the blood elf succumbs to his or her thirst for magic (as Magistrix Elosai's transformation into the Wretched shows).

Felblood Initiates use the wretched model when emaciated, indicating a connection between the two. 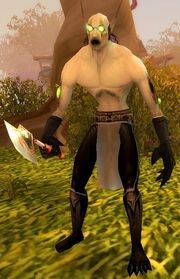 With the events of the Sunwell being used to summon the Legion, a new type of Wretched was created. While some have mild symptoms of this advanced mutation, others have major physical changes. The basic symptoms include bulging green eyes, black rot-like mouths with what looks like black drool coming from them, less hair, green growths, feet, and hands that are more claw-like and are of an almost demon-like brown color, and small holes where growths should be from their Wretched transformation. The ones with the most dramatic changes have deep sucked-in chests, more holes that look like they appeared from popped growths, markings near their eyes, and more of a monster-like appearance, barely resembling their former selves.

These more serious mutations have appeared from tapping into the energies granted by the Burning Legion; in fact, some blood elves trying to become felbloods have become Wretched due to absorbing too much fel energy. These Wretched served Kael'thas fiercely, and he rewarded them by supplying them with mass amounts of fel energy for them to feed on. So far these Wretched have only appeared on Quel'Danas and the Throne of Kil'jaeden, likely because this mutation is fairly new still and can only exist after a blood elf or Wretched has absorbed mass amounts of fel energy — which is mainly located in those two areas.

Magic-addicted elves too small and frail to serve in Kil'jaeden's army were relegated to servant roles for the higher-class demons.[4]

With the Legion's defeat at the Sunwell and Kael'thas' death, the spreading of this new breed of Wretched will probably slow down.

Blood elves are evolving from their high elven cousins due to the use of fel magic (the first sign of evolutionary change are "glowing green eyes"). It is said in time they may become as distant to high elves as satyrs are to night elves.[5] The Wretched may be examples of further evolution, though it is somewhat of a devolution.

The Sunwell has been restored, providing a constant supply of magical energy to both blood elves and high elves, sating their magic addiction. This brings up many questions regarding how it impacts the Wretched: