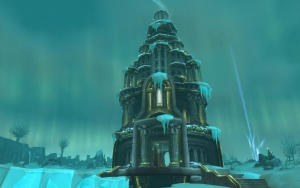 The Wyrmrest Accord was an alliance of four dragonflights — the red, bronze, green, and black flights — created to combat the blue dragonflight's crusade against magic users. The red dragonflight was the most active of the four, with a large number of red dragons guarding Wyrmrest Temple itself.

The Accord is Broken

With the defeat of both Malygos and the Lich King, the Wyrmrest Accord's activities lessened. Alexstrasza began reaching out to the remaining members of the blue dragonflight in a show of good faith, and the representatives of the black dragonflight mysteriously disappeared. After the Cataclysm, the Wyrmrest Accord began meeting with certain blue dragons, including Malygos's son, Arygos, to urge them to select a new Aspect in order to help restore the shattered world. However, Arygos was still angry about the death of his father, wondering aloud if Alexstrasza would simply kill him, too, if it became convenient.

During one such meeting, Wyrmrest Temple came under attack by the twilight dragonflight. The twilight dragons lured the defenders away from the temple, allowing their agents to slip into the sanctums within the Chamber of the Aspects and corrupt all of the eggs within. Their deception was discovered by Alexstrasza's consort, Korialstrasz, who sacrificed himself to destroy the sanctums and all the eggs contained within, heavily damaging Wyrmrest Temple in the process. Consumed with grief over the loss of the eggs, and faced with the possibility that her love might have betrayed them to the twilight dragonflight, Alexstrasza shattered the Orb of Unity, effectively ending the Wyrmrest Accord.[3]

Even though the Aspects worked together once more on retaking the Wyrmrest Temple and then finally on defeating Deathwing,[4] they didn't want to continue with the Accord even though Kalecgos tried to show the importance of this draconic alliance. The former Aspects decided to officially dissolve the Accord during their next meeting in next month. Kalec however summoned the three sooner and reminded them the time when they had been merely proto-dragons and as they had fought against Galakrond together.[5]

Reputation with Wyrmrest Accord can be earned by completing the following daily quests, through Championing via the Tabard, or by purchasing a

[Wyrmrest Commendation Badge] at the Emblem of Triumph Quartermaster in Dalaran.

The Wyrmrest Accord quartermaster, Cielstrasza, resides at the top of Wyrmrest Temple.

Several quests provide reputation with the Wyrmrest Accord.