From Wowpedia
(Redirected from Wyverns)
Jump to: navigation, search

“When mounted on the back of a wind rider, one sees that its reputation for strength and speed is well earned.”

A wyvern, also known as a wind rider and war rider, is a sentient wolfish-lion with bat wings and a scorpion tail native to Kalimdor. They can speak[1] and understand Orcish and Taur-ahe,[2] but cannot understand Common.[3] Both males and females have beards.[4] 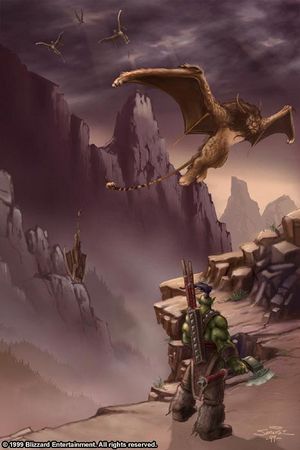 Wyverns share a common ancestry with both dragons and gryphons[5] and hail from some of the most inhospitable regions of Kalimdor, making them masters of adapting to any environment.[6] They can be found living in the harsh cliff-terraces of the Barrens, Stonetalon Mountains, and the Thousand Needles, as well as parts of Feralas.[7] They hold great enmity for harpies, as the vile creatures like to capture them.[8]

The average wyvern is usually about the size of a horse, but some have been known to grow up to three times that size.[9] Wyverns of this larger breed tend to have cubs the size of full-grown bears.[10]

When Thrall first arrived on Kalimdor, Cairne Bloodhoof suggested enlisting the aid of the wyverns who dwelt nearby. Upon reaching their nesting grounds, the two leaders discovered that a band of harpies had captured and enslaved the wyverns. Encountering fierce local resistance, a force led by Thrall and Cairne fought their way to the harpies' lair and slaughtered the vile bird-women, freeing the wyverns.[8] The sentient wyverns of Kalimdor were eager to ally themselves with the shamanistic Horde. Impressed by the orcs' commitment to honor and victory, the wyverns allowed the orcs to ride them into combat against those who would disturb the tranquility of Kalimdor and its denizens. The wyverns use their powerful claws and razor-like fangs against both airborne attackers and ground troops, while their riders may hurl envenomed spears at the enemy.[5] Wyverns are today considered sacred by both orcs and tauren.[11]

Wyverns revel in flight, dutifully carrying Horde riders along various routes surrounding Thunder Bluff and Orgrimmar for a small fee. However, not all wyverns are friendly to the Horde; some are even enraged. Unfortunately, the Horde cannot train enough wyverns to keep up with the demand.

Despite appearing mammalian, wyverns do lay eggs. They are very protective of them, forcing the Horde to take the eggs to raise the newborn wyvern.[12]

The venom of a wyvern, in some circles, is more valuable than the beast itself.[13] The venom resides in two soft and sensitive venom sacs, resting just below the stinger.[9] The Highperch wyverns have a potent, and valuable, venom. The sacs bursting with venom are normally only gathered from young wyverns or fertile females.[13] An Alliance source on Theramore Isle at one point claimed that orc assassins collect venom from the pridewings of the Stonetalon Mountains in order to use the substance on secret death raids against the Alliance.[14]

The Armored Blue Wind Riders are not native to Northrend, but they have adapted extremely well to the cold.[16] The

[Grand Armored Wyvern], renowned among wyvern handlers, was one of the first mounts chosen to take part in the Horde's Dominance Offensive.[17]

Main article: Wyvern mounts
"I still don't get why they fly faster when you put armor on them."
— Drakma[18]

In The Burning Crusade, Armored Wyverns are the epic flying mount of the Horde in Outland. However, in some cases they were apparently trained to accept any rider, as seen by the bombing roosts around Halaa.

[Wind Rider Cub] was available on the Blizzard Store for $24.99 US or €24.99, along with a wind rider cub plushie. It is no longer available for purchase.

Wyverns are tamable by hunters as part of the Feathermane family, added in patch 7.2.0. In order to tame Feathermanes, hunters must purchase the

A wyvern in the Manual of Monsters and Horde Player's Guide.

Like hippogryphs and gryphons, wyverns are intelligent creatures — as smart as any humanoid. Their fierce predator instincts, as well as their harsh environments, lend little trust for humanoids, however. Despite this, wyverns are new allies to the Horde. The green-skinned orcs proved themselves to wyverns in battle against harpies attempting to kill a Stonetalon Mountains flight. Since then, the two species have a growing respect for one another. Wyverns share respect for the tauren just as they do the orcs, though the former are simply too large to join forces with a flying wyvern. A wyvern may choose an orc with a willingness to take to the air, and the two establish a formidable aerial scouting and combat team. Such orcs are known as wind riders. Wyverns are encountered alone as often as they are found in an orc rider’s presence.[19] Orcs raise wyverns to serve as steeds both in and out of combat.[20] Professional wyvern trainers wear thick, elbow-length leather gloves to protect themselves from baby wyverns' deadly stings.[20] When wyvern carry others, such as orcs, they are capable of carrying up to 600 pounds, and that would be considered a heavy load for them. A medium load is between 201-400 pounds and a light load is considered anything under 200 pounds.[21]

In the Appendix Three of Manual of Monsters there are different types of wyverns described: wyvern (dragonkin) and sand wyvern. However the validity of the source is disputed.

Despite possessing mammalian qualities in Warcraft, wyverns were a type of reptilian dragon found in medieval heraldry. Wyverns were differentiated from other dragons by their four (rather than six) limbs and their barbed tails. Wyverns could breathe flame (typically from the nostrils rather than through the mouth), possess a venomous bite, or possess neither or both qualities (depending on culture specifications). The wyvern had an even worse reputation than the dragon — while dragons could be benign or wise, wyverns didn't seem to be sapient.

The wyverns of the Warcraft universe share more features with manticores than wyverns. The manticore was a mythological beast, originally of Persian origin, that had the body of a lion and occasionally wings, possessed a reptilian or scorpion's tail, and had a human face with a shark-like maw containing three sets of sharp teeth. These more leonine wyverns were intended to fit the wiser image of the Warcraft III Horde and to contrast with the evil-looking dragons the Warcraft II Horde stole from Alexstrasza.