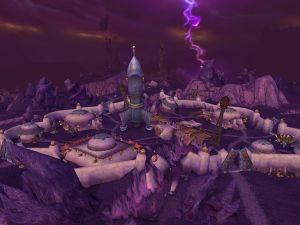 The X-52 Nether-Rocket stands in the center of Area 52.

The X-52 Nether Rocket is a huge rocket stationed on the middle of Area 52. B.O.O.M. engineers are currently working on it. There are a few quests involving it, such as killing nether rays for improving its fuel's blasting capability, stealing technology from Ethereals and protecting it from a giant fel reaver, Negatron. The

[X-52 Rocket Helmet] was probably designed for allowing evacuation of the rocket under unfortunate or emergency conditions. A smaller version, the

[X-51 Nether-Rocket], has been created as a personal mount.