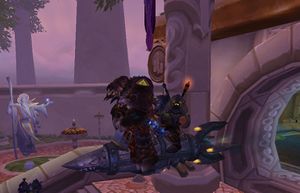 A druid on his X-53 along with a passenger.

X-53 Touring Rocket was originally the second special mount that players could earn only through the Recruit-A-Friend program. The X-53 was available to players who claimed their RAF reward between April 27, 2010 and July 15, 2012. It replaced the

[Swift Zhevra] reward and was then replaced by the

[Heart of the Nightwing].

In patch 5.4.1, the Recruit-A-Friend program was updated to include a choice of one mount from all current and previous Recruit-A-Friend mounts, and one companion from Asian-only promotions.