For the Legion artifact, see

[Xal'atath, Blade of the Black Empire]. For the BfA quest item, see 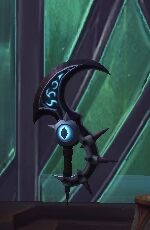 Xal'atath as a sentient blade.

Xal'atath is the sentient entity within a dagger of the same name. Originally an artifact in World of Warcraft: Legion, the weapon ended up being used by a shadow priest during the third invasion of the Burning Legion. Xal'atath later freed herself from the blade by possessing a deceased elven body.

Xal'atath is truly ancient, dating back to the time of the Old Gods' Black Empire. Theories abound as to the nature of its creation: the more outlandish claim that the blade is the remains of a forgotten Old God who was consumed by its kin, while other theories state it is the claw of Y'Shaarj itself. Whatever the truth of its origin, the blade is infused with the Old Gods' power. Legends state that it can even grant its wielder visions of the Black Empire, though doing so inevitably drives the viewer mad.

After the Pantheon's titan-forged armies shattered the Black Empire and chained the Old Gods beneath Azeroth, Xal'atath remained free; changing hands many times over the millennia and sowing death and chaos wherever it went. Eventually, it found its way into the hands of a troll named Zan'do, an ambitious Gurubashi witch doctor ousted from his prestigious position by his rivals. Xal'atath easily twisted his mind, preying upon his anger and turning his thoughts of revenge into an obsession. Xal'atath guided Zan'do and his followers to a mound of black stone at the foot of the Zandalar mountains. Though the Zandalari mystics had forbidden all trolls from approaching it, Zan'do believed it held the power to defeat his rivals--a belief that was only magnified when he learned that it was the remains of a powerful creature named Kith'ix. Xal'atath encouraged Zan'do to make blood offerings to Kith'ix, and the witch doctor butchered his companions in a profane ritual. At its conclusion, Zan'do plunged Xal'atath into Kith'ix's hide. The beast awakened and rose once more, and Zan'do and his followers were never seen again.

Kith'ix awakened the slumbering aqir and sent them to scour the surface of Azeroth, unleashing the full extent of Xal'atath's dark powers against the trolls. Though they would eventually defeat him and his insectoid armies, they never forgot the might of Xal'atath. Many tribes still whisper stories about the black blade that nearly brought them to extinction.

At some point after the Great Sundering, and for a certain period of time, Xal'atath was in possession of the naga.[1]

Thousands of years later, Xal'atath was brought to Sorcerer-Thane Thaurissan's wife, Modgud, by one of the Dark Iron dwarves she employed to search for magical artifacts. An accomplished sorceress in her own right, Modgud was immediately enraptured by the blade and spent several days in her chambers trying to discern its secrets. When she emerged, she sought out the dwarf who had brought it to her to thank him... but no one could find him, or even remember his name or face. Modgud wielded Xal'atath throughout the War of the Three Hammers, using it against the Wildhammer dwarves of Grim Batol and summoning shadowy apparitions from the dark corners of the fortress. Eventually, Khardros Wildhammer fought his way through the Dark Iron army and confronted Modgud herself. She reached for Xal'atath to defend herself but found the blade inexplicably absent. Khardros struck her down with a single mighty blow from his hammer; as she lay dying, she repeated one phrase over and over: "You promised..."

Following the First War, a human priestess named Natalie Seline dedicated herself to studying the foul magics wielded by the orcs, knowing that knowledge of this power was key to fighting it. She heard stories of a dark blade that held sway over the shadows themselves. Troubled that such a blade could exist, she sought it out. As soon as she touched the dagger, Xal'atath spoke to her and she immediately understood that it could not be destroyed. From it, she learned of the Void and its interactions with the Light. By the time of the Second War she had not only learned how to wield shadow magic but taught it to her followers, using its power in secret to wage war against the orcs. Xal'atath's maddening whispers took their toll on her sanity, though, twisting her noble intentions into zealous fanaticism. She and her followers embraced shadow magic wholeheartedly, many even forsaking the Light entirely. Though Seline urged caution, her pleas fell on deaf ears. In time her followers decided that she was keeping the true secrets of shadow magic from them, murdering her in her sleep and taking Xal'atath.[2]

When the Burning Legion invaded Azeroth from the Broken Isles, the dwarven queen Moira Thaurissan worked with the undead bishop Alonsus Faol to search for weapons to fight them. Through double agents within the Twilight's Hammer, they learned the cult was using Xal'atath in some sort of unholy ritual in Tirisfal Glades. They sent a priest to investigate, discovering that the Twilight's Hammer had broken into the tomb of Tyr. Within, Twilight Deacon Farthing was using the blade to attempt to reanimate Zakajz the Corruptor, a C'Thrax who had once served Yogg-Saron alongside Kith'ix. Farthing turned Xal'atath's power against the priest, but when he began to lose the battle the blade abandoned him. Calling him weak, it devoured his soul and told the priest to take hold of it. As the priest clutched the black blade, it whispered that the only way to ensure Zakajz would never rise again was to use Xal'atath to devour its essence. The priest agreed, and as Xal'atath grew in power they departed for the Broken Isles to do battle together against the Legion. This priest ended up as the High Priest of Netherlight Temple.[3]

The priest wielded Xal'atath against the Burning Legion for a time, ultimately consuming much of its power to drain the sword of Sargeras of its corrupting power in Silithus.[4] 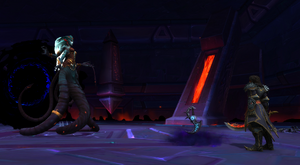 When the naga began attacking Kul Tiras and Zandalar,[5] the adventurer turned to Xal'atath to gain insight into their plans. Collector Kojo had come across the blade by accident near a makeshift altar in Stormsong Valley.[6] Xal'atath explained that the naga sought to conjure a storm powerful enough to scour all Azeroth using three relics: the Void Stone, the Trident of Deep Ocean, and the Tempest Caller. Xal'atath guided the adventurer to Drustvar where they found the high elf Inanis attempting to wield the Void Stone's power. After killing her, Xal'atath drew upon the Void Stone's power and possessed Inanis's corpse.[7] Now in a mortal form, she helped the adventurer find the other two relics[8][9] and brought them to the Crucible of Storms beneath the Precipice of Oblivion.

Rather than stopping the naga, however, Xal'atath offered the relics and the adventurer to N'Zoth in exchange for her freedom. N'Zoth severed her from the dagger, keeping it in the bargain; Xal'atath departed through a portal, confident she would see the adventurer once more.[10]

Soon after, a Horde adventurer brought the severed dagger to Sylvanas Windrunner.[11] Nathanos Blightcaller later held it as the seas over Nazjatar parted beneath his vessel.[12] After landing in Nazjatar, Nathanos, with the blade in hand, ventured away from the rest of the Horde forces in order to complete his secret mission.[13] The dagger eventually found its way into the hands of Queen Azshara, who later claimed that she had intended to use it against N'Zoth. However, her plans were interrupted by the Alliance and Horde, and she was taken to Ny'alotha to be tortured by Dark Inquisitor Xanesh. She was eventually freed by Wrathion and Azeroth's champions and subsequently gave them the dagger so that they could use it against N'Zoth themselves.[14] Wrathion used the dagger to stab at the Old God's carapace, creating an explosion. The blade was not seen afterwards, possibly destroyed in the process.

Are you ready for what comes next?