Xarantaur is a level 80 elite tauren druid and quest giver at Camp Tunka'lo in the Storm Peaks. He is over ten thousand years old, having been among the first tauren druids to be tutored by Cenarius[1] and raised to immortality by Nozdormu to serve as an agent of the bronze dragonflight. The Aspect gave him the Lorehammer. 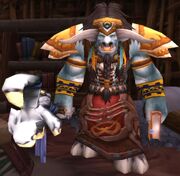 Xarantaur has come to Camp Tunka'lo to find out more of the taunka hero Stormhoof, venerated by his people for his victory over the nefarious North Wind. Finding that the camp's history does not match the story he heard, Xarantaur seeks the aid of adventurers to set things right.

Tell me of yourself, Xarantaur. Why are you called The Witness?

I was one of the first tauren druids, of the last generation taught by Shan'do Cenarius, before the legion, before the sundering, when the world was still young. Before everything changed.

While my brethren hunted great beasts, I hunted stories. I had been drawn to the druidic arts by this hunger, this lust for knowledge. For a time, that hunger was sated as I learned to talk to the trees, rocks, and beasts, and learned their stories.

But then, the time came when Cenarius walked among us no more and my brethren began to forget what he had taught us. I could not forget, though, and I still needed to learn more about our world.

So I said my farewells and travelled beyond the lands of my people.

I wandered for the rest of my natural life in search of knowledge, seeing more wonder and meeting more strange and mysterious races than any of my people before me. I travelled across the length and breadth of ancient Kalimdor until there was no more to see, no new lands across the horizon.

Yet... there was still so much I did not know as I felt my final journey approaching and I wept for the things I would never know.

As I fell, my life at an end, that is when they found me.

The Bronze Dragonflight. They snatched me from the brink of death and took me before their master, Nozdormu. He said they wanted me to continue my hunt. He granted me immortality as a Watcher, tasked to bear witness to the history of Azeroth as one of his agents.

I am Xarantaur the Witness, and it is my duty to preserve the true history of Azeroth, lest it be forgotten.