Xiggs Fuselighter is a level 45 dwarf located at the Hall of Arms in the Military Ward within the city of Ironforge.

Before the Cataclysm, Pilot Xiggs Fuselighter used to come to Azshara to the helipad on his flying machine as part of his quest chain. He owns a favor or two to Tymor. 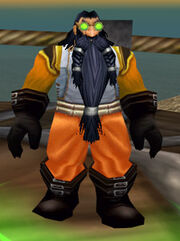 Fuselighter when located at the helipad in Azshara

Based on (and similarly dressed to) X-wing pilot Biggs Darklighter, Luke's friend from Tatooine.

He may be a member of the Ironforge Siege Brigade.