Xin the Weaponmaster is the King of the Mogu Clans and the last boss of Mogu'shan Palace.

The title of weaponmaster has many definitions among Azeroth's inhabitants. To Xin, it means that mogu weaponry obeys his every command. The king is more than willing to demonstrate his deadly skills to anyone who questions his right to rule Pandaria.

Highly recommend of putting him in a corner or on a parallel angle because it goes crazy. He'll do Ground Slam, run behind him or side to side and go back to where you were. Circle of Flame will place a circle of flame on the ground move out of that general spot. Whirlwinding Axes will be a pain because it does massive damage and does a knockback. Near the halfway mark, he'll activate Blade Trap, which means be on a parallel section of the room and don't move. Near the end he calls for arrows to finish you. Kill him and keep up the heals till the last breath. 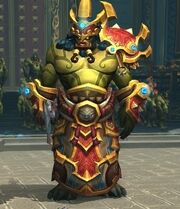 Xin the Weaponmaster before the Trial of the King encounter.

Intro
What is this? More have to claim my crown? They are small, weak!

Aggro
You are not the first to challenge me, peons. You will not be the last!

Summon Axes
Face the might of my arsenal, weaklings!

Summon Crossbows
ENOUGH OF THIS FARCE! You will feel PAIN, cowards!

Reset
Hahaha! I am UNDEFEATED!

Unused quote
Fools! I possess the power of the elements!

He is very likely the mogu on the Pandaria loading screen.