For the monk talented ability, see

“The only opponent is yourself.”

Xuen the White Tiger is one of the four Wild Gods known as the August Celestials who dwell in Pandaria. Xuen watches over the Kun-Lai Summit from the Temple of the White Tiger and is sometimes referred to as the Northern Celestial. He is the spirit of strength.[3] Xuen has two named children, Ban-Lu and Xu-Fu, and a granddaughter, Ban-Fu.

The Duel of Thunder and Strength 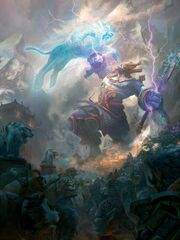 Thousands of years ago as the mogu empire of Lei Shen was growing, the pandaren fled to the harsh climate of Kun-Lai Summit, seeking the protection of Xuen, the White Tiger. Xuen offered them sanctuary for a time.[4] Slaves were required for the building of the mogu's cities and fortresses, and so the armies of the Thunder King marched onto Kun-Lai. So rather than attack the summit, Lei Shen boomed with his mighty voice: "Choose the greatest warrior among you and have him face me in one on one combat. Should I win, your people will submit to my rule. Should he win, I shall leave these lands in peace." "Challenge accepted!" came a voice that boomed across the mountains almost as strong as the thunderous presence of Lei Shen. From the mountains descended Xuen, the White Tiger. The August Celestial had seen the plight of the free peoples and could bear it no more. It is said this duel lasted for thirty days and thirty nights, and the emotions of this duel awoke the sha in great force. But in the end, Xuen fell, crushed by the sheer might of Lei Shen's unearthly power. And so Xuen was bound at the highest peak, Mount Neverest,[4] and made to watch as the pandaren and hozen were made slaves. But the tiger never submitted to Lei Shen's torture. In captivity, he grew stronger. His failure was a lesson, his pride now in check, and he waited until the pandaren slaves would dare to challenge the might of the mogu emperors.[5]

Millennia years later,[4] a pandaren named Kang began teaching his fellow slaves the ways of the monk. When rumors of the movement reached mogu ears, Kang and his fellow monks relocated to Kun-Lai Summit, where they built a secret monastery to continue their training. Kang also discovered something completely unexpected: the prison of Xuen.[6] The White Tiger's isolation had not made him angry or bitter, but had simply made him eager to help.[4] The pandaren often communed with the White Tiger, and Xuen taught him the secrets of harnessing one's inner strength — teachings that Kang passed along to his students, and which were eventually used by the pandaren and the other slave races to topple the mogu empire.[6] Xuen taught Kang not only the strength of raw power, but the strength of endurance. He told the pandaren that to know strength, he had to look to the little life he could find in the heights. Kang looked and saw the twisted, gnarled trees growing along the Kun-Lai ridgelines. The trees' trunks were sturdy and strong and their roots were deep, as they needed to be in order to endure the biting winds. The pandaren used these trees to build the walls of their monastery and craft their first weapons — not blades, like the mogu used, but staves. Kang brought his staff to Xuen, who blessed it, after which the monk named it "Sheilun" after his late son.[4]

After Kang's death and the revolution's end, the staff was brought back to the monastery he and his monks had built in the mountains. Xuen warned the monks that, although they were now free, they had inherited the responsibility to protect their homeland from the mantid, violent insectoid creatures who swarmed the great Serpent's Spine wall every one hundred years in an attempt to conquer all of Pandaria. Every century, the pandaren held fast against the waves of mantid, and Xuen always allowed one mistweaver to carry Sheilun into the battle.[4]

On the day of Shaohao's coronation, Xuen sent a monk from Kun-Lai with the gift of Sheilun to the new and last pandaren emperor.[4]

After he freed himself of his doubts, despair, and fear, Shaohao, journeyed to the high peaks of Kun-Lai Summit, where Xuen and the greatest warriors of Pandaria resided. As Shaohao announced his need of an army, Xuen, having recognized a great darkness within the brash emperor, asked him why he fought. When Shaohao replied his intention to crush the Burning Legion and anyone who stood in his way, Xuen refused to hand him his warriors, but issued a challenge to the emperor: If he managed to touch any of the tiger's warriors with his staff, they were his to command. For hours Shaohao fought, but the warriors were too quick and too nimble for the untrained emperor. As Shaohao grew angry, he cursed and broke the staff over his knee, which brought forth his own anger, hatred, and violence. Defenseless, Shaohao was attacked by the sha he created, but as the smoke cleared, the emperor was unharmed, as one of the warriors had sacrificed himself for him. Humbled before Xuen, the emperor learned that his own passions made him weak, and as he set forth on the final leg of his adventure, he became a creature of patience, love, and peace.[7][8]

Xuen in World of Warcraft.

It is Xuen who was visited by Anduin Wrynn, Zhi the Harmonious and Taran Zhu. He tests adventurers who seek to gain entry into the Vale of Eternal Blossoms, and he is present when the gate to the vale is opened.

He also calls the adventurers to do dailies or in short: fight fighters. He also oversees the fights during the Arena of Annihilation.

After the death of Zhi, mogu invaded the vale and Xuen granted his powers to the Golden Lotus warriors.

As part of Wrathion's legendary journey, he and an adventurer visited the White Tiger in order to get his blessing.

At some point, a group of Shado-Pan led by Master Wan Snowdrift uncovered

[The Fist of Ra-den] and

[The Highkeeper's Ward], ancient artifacts formerly wielded by Highkeeper Ra. Believing that they could do great harm to the world if they fell into the wrong hands, the Shado-Pan delivered the weapons to Xuen, who agreed with their assessment and secured the relics in his lair, the Temple of the White Tiger, for safeguarding. The White Tiger did not, however, intend to keep them forever, for he knew that though the mogu had used them for evil, the titan Aman'Thul had originally created them for good, and he believed that it was only a matter of time until a worthy mortal arrived to take up the fist and the shield in a righteous cause once again.[9][10] 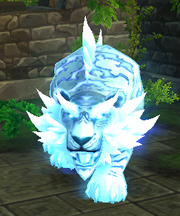 The trial of Xuen is simultaneously a test of strength and a test of restraint. When Xuen gave Emperor Shaohao a 10-foot-pole and asked him to strike one of Xuen's warriors, the Emperor could not land a blow. For without restraint, anger and hatred run wild. To pass the trial of the Tiger, warriors must harness their power, while burying their thoughts of violence.[11]

[90] Why Do We Fight?, the celestials alongside the ghost of Shaohao, Lorewalker Cho and Adventurer gathered around to begin to heal the Vale. As he stands before the tree he still knew you as an inspiration.

Aftermath
Your strength has helped free this land of its long-held darkness. It is my honor to witness your deeds with my own eyes, Champion.

Xuen and other Celestials chose to hold a trial involving the members of the Alliance and Horde rather than sentence Garrosh Hellscream among themselves. During the trial, Xuen took the form of a human as a show of respect to the gathered races.[12]

Xuen holds a competition to find someone worthy of the

Xuen and the other August Celestials defended the Vale of Eternal Blossoms from the Black Empire.

The Burdens of Shaohao Part 4—Anger

Xuen: Why do you fight?
Shaohao: To destroy demon hordes! To crush those who oppose me!
Xuen: No. That is no reason to fight. You are indeed fearless, but, still, you are burdened.
Xuen: Take this staff, and if you can touch any one of my warriors, they are yours to command.

Xuen: Again, I ask. Why do you fight?
Shaohao: For home and family. For the people I protect. For them, I would give my final breath. Thank you, White Tiger.