Not to be confused with Yalia.

Yalia Sagewhisper is the Master of the Shado-Pan's Omnia discipline. These spellcasters are charged with maintaining the wisdom, knowledge, and sacred traditions of the order. She is also the current gatekeeper and she decides who can join the order.

Born as Yalia Sageflower to a prosperous fisherman among many siblings in Zouchin Village, as she grew up Yalia came to understand that her hand in marriage would be given to the son of another fisherman. However she couldn't help but notice that she had not one but two candidates, Yenki and Chinwa. Over time both pandaren began to compete for Yalia's affection and possessing wisdom beyond her years realized their rivalry would not end even after her hand in marriage had been won. Realizing that this rivalry would only end with one of the pair dead and the other left in guilt, which would destroy both lives Yalia made the difficult decision to leave the village; she was not yet even six years old. With the support of her grandmother, who wrapped her granddaughter up in her favorite scarf, she traveled from the village towards the Shado-Pan Monastery where Taran Zhu accepted her into the order and gave her the name 'Yalia Sagewhisper'.[3]

The Trial of the Red Blossoms

Shortly after the Horde and Alliance discovered Pandaria and explored the continent, Yalia was faced with initiating new pandaren initiates into the Shado-pan. To that end she began the Trial of the Red Blossoms, overseeing the first trial being the Test of Resolve. After the first trial, she led the four remaining initiates (Ten, Pei-Ling, Heavy Chan, and another boy) to Master Wan Snowdrift so that they could undergo the second trial, The Test of Strength. However during this test to the shock of the Shado-pan a sha interrupted the test and attacked the initiates, but the three survivors were able to work together to defeat the sha.

Over the next week, Master Snowdrift would give the initiates acolyte uniforms as he determined that they had proved their worth, only for Yalia to take them back the next day as three trials had not yet been given, only two. After mildly arguing over the matter, they agreed it was up to Hawkmaster Nurong to decide.

Nurong, after explaining to the initiates the full consequences of having been exposed to the sha at such a young age and how it would affect them for the rest of their lives, simply asked, for their Trial of Spirit, if the three were still willing to take the Shado-pan oath and face the sha again, much to Yalia's shock. Scowling, she protested that the oath can not be the test and must only come after the three tests have been passed. However, Nurong warned her to not instruct him on his duties and reminded her that tradition has the Wu Kao master administer the final test. He explained that the initiates had elected to serve their people, knowing full well what terror awaited them in the coming years and that they had shown the courage and strength of spirit that the order needed in the dark days it now found itself in.[4]

Yalia can be found at the Longying Outpost in the Townlong Steppes, where she directs Horde and Alliance adventurers to help the Shado-pan in the region.

With both Vol'jin and Tyrathan Khort recovering at the Shado-Pan Monastery, Yalia was concerned that the Shado-pan could be dragged into the Horde-Alliance conflict. She was further concerned that the two might try and kill one another while they were recovering from their injuries. However, both Chen Stormstout and Taran Zhu were able to appease her concerns by promising to inform the warriors of a "no-kill rule" and about how the Horde and Alliance had been helping the Pandaren.[5]

Meanwhile, due to his numerous visits to the monastery, Yalia found herself growing close to Chen and they would end up traveling to Zouchin together, wherewith his encouragement Yalia revealed herself to her family, to their great joy. When word came that the Zandalari were going to attack the village the pair helped evacuate the village, while Vol'jin, Khort, and Shado-pan agents fought off against the Zandalari. Yalia would escort her family amongst a group of refugees to stay at the Stormstout Brewery alongside Li Li Stormstout before returning to the Shado-Pan Monastery, where after a short period she was reunited with Chen who had escaped the Isle of Thunder with his companions. It was then that Yalia became part of The Thirty-three and fought to protect the monastery against the Zandalari. It was while setting traps against the Zandalari that Yalia and Chen admitted their feelings for one another and kissed while admitting their desire to have cubs with one another. After successfully repealing the Zandalari offensive, Yalia and Chen parted ways, as Chen promised to return, but decided to help Vol'jin launch the Darkspear Rebellion, and Yalia promised to wait for him while she aided the Shado-pan.[2]

Yalia can be found among the Shado-Pan Assault force which seeks to put an end to the Thunder King, she is there to assist the player and Taran Zhu in the final confrontation with Shan Bu, and is there to witness Taran Zhu quelling the fighting between the Sunreavers and the Silver Covenant.

Yalia can be seen on the Timeless Isle overlooking the Celestial Court with Ling of the Six Pools and Sam the Wise. 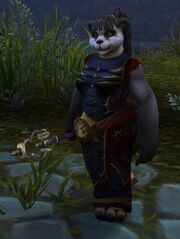 As some of the best alchemists that the Conclave at Netherlight Temple had to offer, Yalia and Zabra Hexx traveled to Azsuna to aid the Illidari on the front lines against the Burning Legion. Prophet Velen sent the Conclave's High Priest to find the two of them so they could prepare an extract that would grant him a vision of the future.[1] While in Azsuna, Yalia and Zabra were attacked by the local murlocs, and dropped the supplies they were delivering to the Illidari while they fled. The two were also separated in their fleeing.[6][7] After the High Priest saved Zabra from basilisks and helped to rescue Yalia from the murlocs that had imprisoned her, Yalia and Zabra looked for ingredients for Velen's elixir while the High Priest delivered their supplies to the Illidari.[8] Afterward Yalia expressed admiration of the High Priest's willingness to help, and told them that they did not need to go into battle with the Burning Legion alone.[9]

Zabra and Yalia's elixir would later help Velen to see visions of the Scarlet Onslaught and Cult of Forgotten Shadow joining the Conclave, and Balnazzar attacking Netherlight Temple.[10]

Gossip
We will not rest until our duties here are done.