Yazma was a member of the Zanchuli Council of the Zandalari, and the high priestess of the spider loa Shadra.[3] She was King Rastakhan's spider, it was her duty to ensure schemes and plots that would harm the kingdom were heard before they hatched.[4] She sided with Zul and his master, the Blood God G'huun, in a plot to overthrow Rastakhan and free the Old God. She consumed the might of Shadra, transforming her into an arachnidian being, and was tasked with holding the sacred temple of Atal'Dazar for Zul.

High Priestess of the spider loa Shadra, Yazma comes from a long line of priestesses who served the King as the keeper of secrets and spies. Through Yazma's diligence, King Rastakhan was warned of and survived at least fifteen assassination attempts. It was her spy network that also led to the discovery of the Gurubashi once again practicing blood magics and worshiping the fallen loa: Hakkar.[3]

At Zul's command, she traveled to the Port of Zandalar and enlisted the Speaker of the Horde in spreading the word of Zul.[5] In light of the Amani and Sandfury tribes shacking down merchants in the Port of Zandalar, Yazma called for the deaths of Disciple of Akil'zon, Disciple of Nalorakk, Disciple of Jan'alai, and Disciple of Halazzi and the collection of tongue of Gahz'ragon.[6][7] After Zolani's orders for the Speaker to report the situation at the docks to Rastakhan, Yazma acknowledged that while they had a problem she didn't feel that they needed to bother the king with it. Instead Yazma declared that she would inform Zul, who would then decide if these issues were worthy enough of Rastakhan's attention.[8] After Rastakhan ordered Loti and Raal to deal with the dark heresies being practiced in the Zanchul, Yazma directed the Speaker to aid them.[9]

When Zul began his coup against King Rastakhan, Yazma sided with Zul and killed Habutu before he could inform Rastakhan of their treachery.[10] Seeking to siphon the power of the loa, Yazma and Vol'kaal pulled their forces to the Garden of the Loa.[11] Vol'kaal engaged the Speaker of the Horde in battle, as Yazma siphoned Shadra of her power. While Yazma would be successful in claiming the loa's power as her own, Vol'kaal would be killed.[12] As Yazma regrouped with Zul at Atal'Dazar, King Rastakhan led Zandalari loyalists and the loa Rezan, Gonk, and Pa'ku against them. During the conflict, Yazma and Zul were confronted by Rezan in Atal'Dazar and Yazma bore witness to the death and resurrection of Rezan, in Zul's service.[13]

At some point, Yazma used her newfound powers to reanimate Vol'kaal's corpse with the intention of him serving her for all eternity.[14] In time, adventurers invaded Atal'Dazar in order to put an end to Yazma. As the conflict unfolded Yazma thanked them for killing Priestess Alun'za as it would strengthen her hold on the temple, declared them worthy sacrifices upon seeing them slay Rezan, and vowed to revive Vol'kaal when he was slain. Despite using the powers of Shadra, Yazma would ultimately be slain.[15] 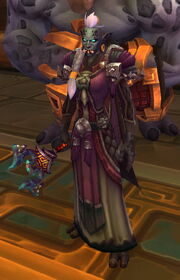 Yazma before her transformation

Dazar'alor
You stand before Yazma, de king's spider. It is my duty to ensure dat schemes and plots dat would harm de kingdom are heard before dey hatch.
So do not get any ideas... Horde filth.