Not to be confused with wendigo or sasquatch.

Yetis are large, furry humanoid animals that usually live in or near caves. Some of the varieties in colder regions breathe ice breath. Yetis are skinnable, unlike most humanoids. Yetis can be found in Feralas, the Hillsbrad Foothills, Winterspring, and the Alterac Mountains. They can also be found in Northrend and Pandaria.

Although generally regarded as untamed beasts, yetis are actually quite intelligent. The ones in Feralas, notably Feral Scar, utilize strategy in combat, name each other and even believe in an afterlife called the "Afterlands." Those in Feralas forged an alliance with the Woodpaw clan of gnolls, with the help of Aramar Thorne and his crew.[2]

In Wrath of the Lich King, the yetis of Northrend got a new more intimidating look. They also appear to be far more intelligent than the yetis of the Eastern Kingdoms and Kalimdor, with the capability of complex speech and understanding.

The taunka of Northrend have been hunting the giant yetis of the Howling Fjord for generations. Traditionally, the hunt includes the usage of a loud horn carved from a ram horn and whose call allegedly mimics the mating call of the female yeti.[3]

Note that The Wrath of the Lich King Bestiary called this model a "wendigo", but they are consistently referred to as "yeti" elsewhere. 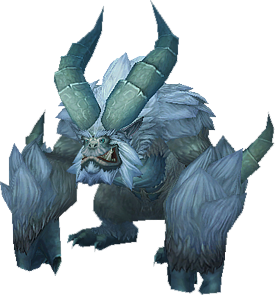 In Mists of Pandaria, the yetis of Pandaria receive a look that appears to be a cross between the huge yetis of Northrend and the smaller yetis found in the Eastern Kingdoms, while still looking intimidating.

Even though no yetis are found in the wilds of Draenor, a yeti mount is rewarded from

[Challenge Warlord: Silver]. Draenic legends also tell of the monstrous Grumpus and his Grumpling minions, but it's possible that these creatures simply use the yeti model and aren't actually meant to be yetis.

Hostile yetis congregate in the Waning Glacier of Tiragarde Sound and among the snowy foothills of Drustvar. They are noted as being hostile to travelers and dangerous to neighboring eco-systems. Those of the glacier are also explained to rapidly breed, to such an extent that their numbers threaten the gryphon taming camps below. 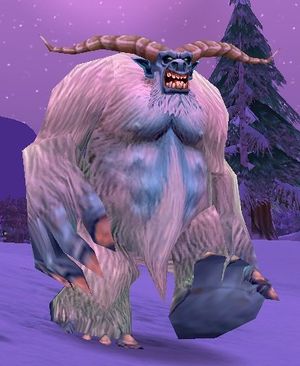 The first yeti model, which has been completely replaced.

Yetis are cousins to wendigos. They live in colder climates, far away from civilized communities. Yeti are far more territorial and aggressive than wendigo, usually attacking intruders on sight. A yeti begins combat with its breath weapon and then closes into melee, attacking fiercely.[5]