For the encounter in Ulduar, see Yogg-Saron (tactics).

"ALL PLACES. ALL THINGS HAVE SOULS. ALL SOULS CAN BE DEVOURED."[7]

Yogg-Saron (pronounced yog-suh-RAWN)[4] is one of the four Old Gods of Azeroth, mysterious and dread elder beings that were defeated and sequestered by the armies of the titans during the world's primordial ages. Upon its fall at the hands of the Pantheon countless millennia ago, Yogg-Saron was imprisoned inside the titan complex of Ulduar within the depths of what would become the continent of Northrend.

Yogg-Saron is responsible for many horrors suffered by Azeroth. In an attempt to escape its prison, the Old God corrupted the titan-forged keeper Loken and turned him against his own brethren, resulting in the death of Tyr, and created the Curse of Flesh, a malaise that turned countless titan-forged into mortal beings of flesh and blood. Millennia later, Yogg-Saron also corrupted the World Tree Andrassil, forcing its night elven creators to cut it down, but not before the Old God secretly managed to open a gateway into the ethereal spirit world known as the Emerald Dream and plant the seed of corruption that would later grow into the Emerald Nightmare.

Yogg-Saron made its first appearance in World of Warcraft as the final boss in the Ulduar raid instance, which was implemented in patch 3.1.[8] It serves as one of the secondary antagonists in Wrath of the Lich King.

Yogg-Saron seemingly later returns in World of Warcraft: Legion, its whispers heard throughout the halls of Ulduar once again. 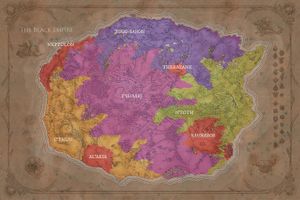 Yogg-Saron in the north of ancient Kalimdor during the reign of the Black Empire. 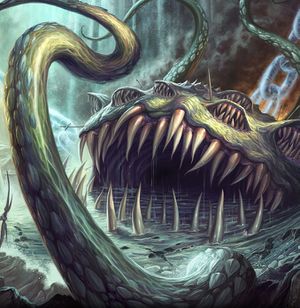 Yogg-Saron on the cover of World of Warcraft: Dungeon Companion 3.

One of the greatly malevolent and ancient entities known only as Old Gods, Yogg-Saron held chaotic tyranny over the world of Azeroth in the very distant past, and was responsible for the creation of the Curse of Flesh to "facilitate assimilation" of the Titans' creations. When the Titans waged war against the Old Gods and shattered their citadels, they found that the infestation of the entities had grown so severe that destroying the Old Gods would also lead to the annihilation of Azeroth. Instead, the Pantheon took measures to neutralize the Old Gods' power and bind them within Azeroth for the remainder of its existence. Yogg-Saron was sealed away within the depths of Ulduar in the far northern reaches of the infant world, and had six watchers assigned to it which served as wardens for its near-eternal imprisonment; the Titanic watchers known as Loken, Thorim, Hodir, Tyr, Mimiron and Freya.

In time Loken would have an affair with Sif, the wife of his brother Thorim. Yogg-Saron, from his prison within Ulduar, muddled Loken's thoughts and made him lash out at Sif, scared at the thought of losing her, and he killed her by accident. Horrified at what he had done but too scared to tell Thorim the truth, Loken tricked Thorim into believing that it had been the work of Arngrim, the king of the frost giants, turning Thorim against his allies. Loken would stop the war between Thorim's and Arngrim's forces with an army he had created with the Forge of Wills, but unknown to Loken Yogg-Saron had planted the curse of flesh inside the forge, which would slowly convert titan-forged into flesh and could also spread to those forged before the curse was created.[9]

With Thorim retreated to the Temple of Storms, Loken who was desperate to cover his actions, even if it meant using Yogg-Saron's power to do so, for if Algalon or the Pantheon ever found out his life would be forfeit. He arranged the death of Mimiron, making it look like a lab accident, though Mimiron's mechagnome followers would create a new mechagnome body to house the Keeper's soul. Loken subdued Hodir and Freya, corrupting them into complacency with Yogg-Saron. He convinced the titan-forged Helya to imprison Odyn, the Prime Designate, within his Halls of Valor, claiming the title of Prime Designate that was rightfully Odyn's in the process. Loken expected Ra to come up from the south and investigate what was going on, but Ra never arrived. This is because he had discovered that the Pantheon was dead, killed by Sargeras, and had locked himself up in the Mogu'shan Vaults in despair. Afterward, Loken exiled all titan-forged from Ulduar and retreated into the depths of the complex.[9]

For thousands of years the imprisoned Yogg-Saron was unable to do more than keeping the Keepers, Loken included, quiet and complacent inside Ulduar. His grasp on them was tenuous, and convincing them to directly help the Old God had proven fruitless in the past. It was not until Cho'gall of the Old God-worshiping Twilight's Hammer clan infiltrated Ulduar and weakened Yogg-Saron's chains that the entity's influence on the Keepers increased, becoming strong as iron. Yogg-Saron commanded Loken to create a new army from the Forge of Wills. In Loken's hands, the forge churned out legions of iron dwarves and vrykul who sought only bloodshed and war.[10] 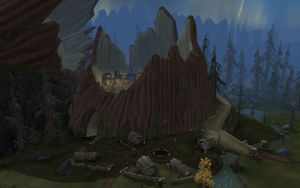 The remains of the world tree Vordrassil.

Yogg-Saron was also the source of the corruption that befell the world tree Vordrassil,[11] after its roots grew too close to the Old God's prison[12] and allowed it and the other Old Gods to create the Emerald Nightmare.[9] The ancient druids growing Vordrassil destroyed the tree immediately upon discovering the sheer power behind Yogg-Saron's corrupting influence, however the taint nonetheless continued to spread to the Grizzlemaw furbolgs who came to inhabit the tree's stump ages later. They became murderously insane soon after settling within Vordrassil's remains, and began attempting to regrow the afflicted world tree. The Furbolgs also used the dire power still emanating from the tree's stump to resurrect the bear god Ursoc, who returned to the world as a viciously twisted reflection of his former self.

During the encounter with the Old God in the Ulduar raid, three visions are shown to players which represent key moments in the history of Azeroth; strongly implying Yogg-Saron can be directly linked to these events somehow. These three visions include the creation of the Dragon Soul by Neltharion and the other Dragon Aspects during the War of the Ancients (which resulted in the Great Sundering of the world), the assassination of King Llane by Garona Halforcen (which caused the fall of Stormwind at the end of the First War), and a vision of the Lich King torturing Bolvar Fordragon (the man who would become the new Lich King after Arthas Menethil's death). During this last vision, the voice of Yogg-Saron can be heard proclaiming: "He will learn--no king rules forever! Only death is eternal!", a prophecy of the Old God that would come to pass with Arthas' defeat by the Ashen Verdict, and the words of which are eerily repeated by Terenas Menethil's spirit as his final words to his dying son.

When Brann Bronzebeard and Khadgar traveled to Ulduar to meet Magni Bronzebeard, saronite vapors flooded Ulduar's antechamber and faceless ones attacked them as an Old God, presumably Yogg-Saron given the location and saronite, whispered in their minds.[13]

Throughout Northrend deposits of an unnatural ore named "Saronite" can be found, which is called the "Black Blood of Yogg-Saron" by the Tuskarr people and who advise any who will listen to keep their distance from it. Saronite is known to drive any that are repeatedly exposed to it to violent insanity, and it appears to be a type of byproduct of the Old God's physical manifestation. The Scourge mine extensively for this dread ore;[14][15] It is used in their fuel, armament, weapons and most notably in the construction of their buildings, including Icecrown Citadel itself.[14][16][17] Alliance questing revealed, however, that the undead of the Scourge mysteriously utter the name "Yogg-Saron" with tremendous hatred and contempt.[17]

Blizzard representatives have stated that they feel the connection between Yogg-Saron and the Lich King ended up being poorly expressed in-game,[18] but added that it "had a lot to do with the ability for mortals to become corrupted."[19]

"Yogg-Saron" is a composition of several different NPCs in the Ulduar encounter:

The whispers heard inside Whisper Gulch from "An Unknown Voice" are listed in the game files as "Creature - Yogg-Saron Whisper". They sound similar to the whispers of C'Thun, the first named Old God:

In the 5-man Ahn'kahet instance, which features a desecrated Nerubian temple now dedicated to Yogg-Saron, "A Mysterious Voice" can sometimes be heard whispering to players at random. This voice most likely is Yogg-Saron's as well:

(These voices can also be heard within the Ymirheim Saronite Mines.)

In Cataclysm, archaeology allows for players to assemble fragments of an ancient Nerubian puzzle box that is somehow related to Yogg-Saron's dread and mysterious nature. The puzzle appears impossible to solve properly, but with every attempt the player makes the Old God will whisper chilling knowledge to them:

Yogg-Saron appears as a legendary card in the Whispers of the Old Gods expansion for Hearthstone. Its flavor text reads: "I spell your doom... Y-O-U-R D-O-O-M!"

In Warcraft III: The Frozen Throne, Arthas encountered and defeated a "Forgotten One" while traveling through Azjol-Nerub. This eldritch creature could have been a manifestation or extension of Yogg Saron, similar to Il'gynoth with N'Zoth.

During the encounter in Ulduar, players encounter three visions in Yogg-Saron's mind:

The Old God's relation with these events is unknown.