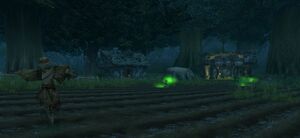 The Yorgen Farmstead is an abandoned farm in southern Duskwood. The farm was once owned by Sven Yorgen who can be found at the small camp on the Darkened Bank. The farmstead is now in the hands of the Defias Brotherhood. Be wary when approaching the farmstead, as many stealthed Defias assassins patrol the area.

Following the Cataclysm, the Defias seemingly abandoned the farmstead, which is now home to a new elemental mob known as Corpseweed.[1]

During Diablo's 20th Anniversary, players who successfully killed a Treasure Goblin were able to access a portal to the "Secret Cow Level", a special phased version of the Yorgen Farmstead inhabited by diabolic bovines, tauren and even the dreaded Cow King himself.