Ysondre was once one of the four Dragons of Nightmare, and the only one that had been freed from the Nightmare's taint. Her freedom, however, was only a temporary affair.

In recent times, Ysera's most trusted lieutenants were warped by a dark new power within the Emerald Dream. These wayward sentinels then passed through the Great Trees into Azeroth, intending to spread madness and terror throughout the mortal kingdoms.

Once one of Ysera's most trusted lieutenants, Ysondre had gone rogue, sowing terror and chaos across the land of Azeroth. Her formerly beneficial healing powers had given way to dark magics, enabling her to cast smoldering lightning[1] and summon the crazed spirits of druids trapped within the Emerald Dream to aid her.

Twisted and insane, Ysondre was bent on unleashing vengeance upon the mortal world as if Azeroth were the force behind the Emerald Dream's corruption.[citation needed]

With Emeriss and Lethon already dead, Ysondre asks for help from players to kill Taerar during a quest chain in Feralas. With that grim task finished, Ysondre is the last of the former Dragons of Nightmare, and although she has been saved from the nightmare, she states she can never return to the green dragonflight. She hopes that one day, she will be able to live a simple life, hidden among mortals.

Ysondre and the Dragons inside the Emerald Dream

Ysondre has been drawn back into the Nightmare and nightmares of her former comrades have joined her, completely consuming the Emerald Dreamway in shadows. She is ultimately slain, with Malfurion mourning her cruel fate.

After the defeat of Xavius, Ysondre's spirit along with the spirits of the other three former Dragons of Nightmare are seen in the restored Emerald Dream. 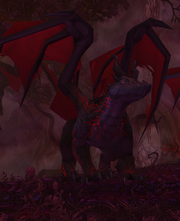